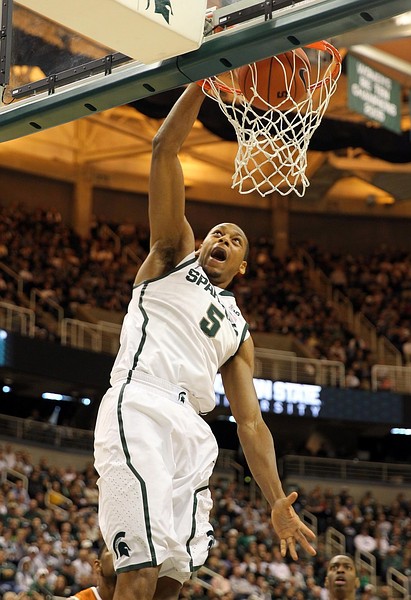 We all know that come March, college basketball becomes all about the guards. In fact, whatever teams have the best guard play typically advance the farthest in the NCAA tourney. But, every coach loves to have a big man–especially a GOOD big man. And, look around: They typically are few and far between. But this year, the Big Ten has a plethora of good players who are 6-10 or taller-and three of them are freshmen.

I've been chalking up Super Sevens all season, and now here's my look at who I think are the best big men (6-10 and taller) in the Big Ten.

1. Cody Zeller, 7-0, Indiana. Could anyone else top this list? Of course not. The 240-pound sophomore has no peer when it comes to the pivot position and may be the national player of the year. Zeller has deft touch around the basket, can run the floor with the agility of a guard and hit a jumper. Want more? He?s strong and tough, too. The ultimate weapon and future lottery pick averages 16.6 points and 7.8 rebounds and is the fulcrum for a great Hoosiers team.

2. Jared Berggren, 6-10, Wisconsin. The senior has developed into one of the most effective big men in the Big Ten-if not the nation-and may have an NBA game. Berggren can run the floor, bang down low and stick a three-pointer, making him a difficult matchup. He averages 13.4 points and 6.4 points and can play power forward and the pivot. Plus, Berggren has a high basketball I.Q. Just watch him pass sometime. Beautiful.

3. Adreian Payne, 6-10, Michigan State. Few can finish with as much authority as the 240-pound Payne. His raw strength and power make him a force in the interior-and a freak to defend. And the junior also has extended his range en route to averaging 8.1 points and 7.4 rebounds. Payne is nowhere near his potential. Scary.

4. Brandon Ubel, 6-10, Nebraska. The senior is sidelined with a broken elbow that kept him out at Michigan State and likely out vs. Purdue on Wednesday but is expected back this season. Good thing, because the Cornhuskers need his underrated game. Ubel runs the floor well, scores in the post and has range that Tim Miles and staff would like to see more of. He?s a mismatch waiting to happen and averages 12.1 points and 6.8 rebounds.

5. A.J. Hammons, 7-0, Purdue. At 280 pounds, Hammons is the ultimate ?aircraft carrier.? He has a developing array of post moves and is working on his touch at the free-throw line, which is key since big men get fouled often. Once the freshman defines his body and crafts some signature moves, Hammons will be a force. As it is, he already is excelling, averaging 10.3 points and 6.1 rebounds while being a defensive force in the paint.

6. Adam Woodbury, 7-1, Iowa. He has made an immediate impact upon arrival, showing uncommon athletic ability for a 7-footer. Woodbury can play with his back to the basket or facing the rim. The uber-talented 235-pound freshman is averaging 6.0 points and 5.6 rebounds and has the ability to get up and down the court and can pass. And Woodbury is gonna be a good defensive player as he refines his technique.

7. Mitch McGary, 6-10, Michigan. Almost went with 6-11 Nnanna Egwu of Illinois, but McGary gets the edge for the last spot on this list. He arrived amid lots of hype and hasn?t disappointed. Despite weighing 250 pounds, the freshman runs the court well. And McGary averages 5.4 points and 5.9 boards, playing a big role for one of the best teams in the nation. What?s best about McGary? He always plays 100 percent. Good things await the kid.