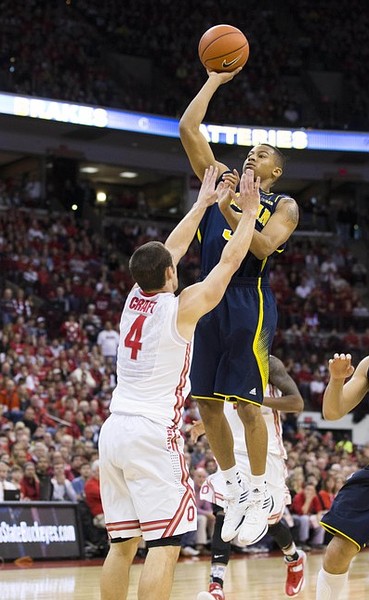 What a big weekend of hoops in the Big Ten, with Titanic games between Minnesota and Indiana and Michigan and Ohio State. Great place to start daily links. Esteemed Indianapolis Star columnist Bob Kravitz came away impressed with Indiana freshman point guard Yogi Ferrell following the Hoosiers? hang-on-for-dear-life win over Minnesota on Saturday.

Why not? Ferrell was sensational, driving, dishing, scoring and defending. How much so? Kravitz says Ferrell reminds him of-yep, you guessed it and have heard it before-Isiah Thomas. Ferrell isn?t asked to do as much as Thomas was a freshman in 1979-80. And, Ferrell doesn?t need to on this deep Hoosiers team. As Kravitz notes: Ferrell just needs to handle the ball, push the pace and get Indiana into its sets. When it?s all said and done, Ferrell may be viewed as the best pure point guard this storied program has known since Thomas.

The great Sid Hartman of the Minneapolis Star Tribune says Golden Gophers coach Tubby Smith laments the missed opportunity vs. the Hoosiers. A loss is a loss, but Minnesota can build and learn from the experience in Bloomington. And, there is no time to sulk with a huge game vs. visiting Michigan on Thursday.

The two thrust and parried with aplomb in a classic back-and-forth exchange that saw Hollins tally 21 points and Burke notch a career-high 30 in Michigan?s overtime triumph in the quarterfinals of the Big Ten tournament in Indianapolis. Now, the two will lock horns again on Thursday night in the Barn. And each will be playing with a sense of urgency, as the Golden Gophers (at Indiana) and Wolverines (at Ohio State) are coming off tough road losses.

The Michigan at Ohio State game was a thriller. A big reason why was because of the battle of star point guards: Trey Burke vs. Aaron Craft.

Advantage Craft in this one, as Burke may have been trying to do too much in a return to his home town and looked rattled by Craft?s suffocating defense. Could Michigan have been distracted by the prospect of being ranked No. 1 if it had won?

Regardless, know this: The teams will meet again on Feb. 5 in Ann Arbor. And, I can?t wait.

Illinois? loss at Wisconsin on Saturday was ? ugly. In fact, the great Loren Tate of the Champaign News-Gazette says it can?t much worse.

Well, here, just read this excerpt: ?All those months of intense coaching and encouragement. All the confidence that built up throughout a 12-win getaway ? those positives draining away while Illini Nation grimaced at the memory of last year?s Nebraska trip as a similar collapse ran its course at Wisconsin?s Kohl Center.?

Now, don?t you wonder: Is Illinois an NCAA tourney team? I know Tate thinks making the Big Dance would be a ?major? accomplishment for this team. Stay tuned.

This is a key week for Purdue, a week in which it apparently has two winnable games: at Nebraska and vs. West Virginia, according to Jeff Washburn of the Lafayette Journal Courier. Notching victories is needed to bolster the confidence of a young Purdue team that?s still struggling for consistency (see, shooting).

HawkCentral.com has a terrific tribute to Chris Street, the former Iowa star hoopster who died almost 20 years ago in a car accident.

There is work to do on defense, especially the run defense, for Nebraska to move from a good to a great team. Will it happen in 2013? Time will tell, as the Huskers look to move from nine wins to 12.

Getting players certainly will help Nebraska?s cause and Husker recruiting coordinator Ross Els knows it will be vital to finish strong with Signing Day looming next month.

One of the top hires for new Wisconsin coach Gary Andersen was offensive coordinator Andy Ludwig.

He pushed the buttons on some good attacks at San Diego State, Utah, Cal and Oregon, among other stops. And he?s eager to get established in Madison and to keep the Badgers? attack humming. The first step is finding a quarterback from a group that includes three returning players with starting experience in Joel Stave, Curt Phillips (who is expected to get a sixth year from the NCAA) and Danny O?Brien, as well as promising redshirt freshman Bart Houston.

The great Marc Morehouse of the Cedar Rapids Gazette put a wrap on the dreary 2012 Iowa football season, a season known as ?the year of seven touchdown passes.?

Quarterback James Vandenberg is gone. Up next is a battle among Jake Rudock, Cody Sokol and C.J. Beathard to see who can jump start the offense that was a lightning rod for criticism under first-year coordinator Greg Davis. Unless marked improvement is made-particularly in the passing game-it could be another long season in Iowa City.

Penn State has some big holes to fill on defense. And none will be bigger that the vacancy created by tackle Jordan Hill?s departure. So, who does he think will take his spot? Austin Johnson and Derek Dowrey are the ones Hill likes. Developing the line will be key, as the back seven of the defense could be pretty good.

My take: I agree. And that?s a pretty nice lineup, too.

A No. 1 ranking would've meant something to Michigan, it would have. But in the end, it doesn't matter right now …

My take: Exactly, so don?t sweat it.

It's a bit hokey that Russell Wilson says "Go Hawks" after his interviews, but you got to like it…a college mentality for a pro team

My take: The NFL could use more of that.

My take: The Hawkeyes had to win if Iowa wants to move up the Big Ten food chain.

Hm, interesting that Thursday's Michigan-#Gophers matchup will be two teams that each just NEARLY made a massive comeback on the road

My take: Yes, the similarities are eerie.

Clark Kellogg to Thad Matta: "I don't know if I've ever seen a coach sweat like you do." #ForgettingGaryWilliams

My take: Someone get me a towel.