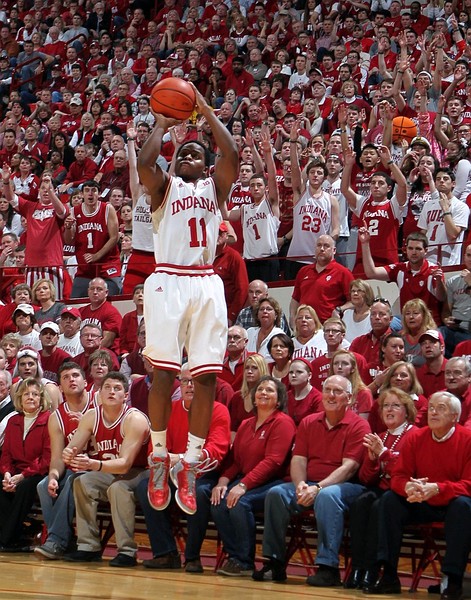 This weekend featured a lot of games where the home team came out of the gate strong, though there were some second half scares as well. Indiana ran all over Minnesota in the first half on Saturday, opening up a 23-point lead after the first 20 minutes.

Throw in the fact that the Hoosiers secured half of their (rare) misses, and this is about as close as you?ll find to offensive perfection. There was not a single statistical category in which IU was anything short of excellent in the first half. Minnesota, for its part, was actually pretty good across the board as well (the Gophers also rebounded about half of their misses), except for one glaring area-turnovers. Indeed, ballhandling and defensive rebounding are glaring weaknesses for what is otherwise a fantastic basketball team. But as Saturday showed, those two issues may well prevent Minnesota from being Big Ten title contenders.

In the second half, however, Indiana turned the ball over 11 times and Minnesota shot 43 percent on threes. Not only that, but the Hoosiers only converted just six field goals in the entire second half as their hot shooting stayed in the locker room. It was really thanks to Minnesota?s over-aggressive defense that sent Indiana to the free throw line a staggering 36 times in the second half that enabled Indiana to put this one away. While Tom Crean wasn?t happy with how his team closed out the win (?[w]e have a lot of room for improvement?), I prefer Cody Zeller?s take on the matter-?[a] win?s a win in this conference.? This is especially true when talking about a team like Minnesota, which came into this game at 3-0 in the Big Ten, with none of the wins being particularly close.

It was a rare scoring distribution for the Hoosiers, as Indiana?s bench only managed 3 points. You expect more from a bench that features Will Sheehey. Victor Oladipo led the way with 20 points on 10 shots. Andre Hollins led Minnesota with 25 points on 20 shots.

The other marquee game of the weekend also featured the home team running out to a huge lead in the first half, only to see it slowly disintegrate. In the end though, Ohio State was able to hold on to a 56-53 victory over the last unbeaten team in college basketball. The Buckeyes? lead grew as large as 21 points in the first half as Michigan struggled with early turnovers. From there, it was really Michigan?s defense that got them back into the game. Indeed, Ohio State scored only 27 points over the game?s final 27 minutes, but it was enough to knock off what would have been the top-ranked team in the nation.

Through Ohio State?s first four games in conference play, it?s clear that this team does not have much on offense once you get past Deshaun Thomas. Against Michigan, Thomas was again the only Buckeye in double figures, with 20 points on 18 shots. But that doesn?t mean that this Ohio State team is one to take lightly. None of the Big Ten opponents they?ve faced have scored over a point per possession. Even if this is a flawed offensive team, there?s no denying that there is some serious defense being played in Columbus.

Although Michigan won?t get to bask in the glory of a #1 ranking this week, this is hardly an awful result. Assuming Ohio State?s defense keeps playing strong, our hand-wringing about the Buckeye offense may ultimately prove beside the point. All of this is to say that OSU has quelled some fears about possibly being something closer to a bubble team. And losing on the road to good teams is certainly no cause for shame. Though I?m sure the fact that the Wolverines? No. 1 ranking was denied by Ohio State, of all teams, doesn?t sit too well in Ann Arbor. But there isn?t too much time to dwell on that, as Michigan?s road trip continues with a trip to Minnesota on Thursday.

Saturday featured two teams heading in opposite directions, as Wisconsin shredded a reeling Illinois squad. The Badgers came into this game on a five-game winning streak, albeit one against some weak competition that included both Penn State and Nebraska. But the Illini didn?t stand a stance at the Kohl Center. Bo Ryan?s team jumped out to a 14-point lead before Illinois scored a point, and it got worse from there. In all, the Badgers scored 1.3 points per possession, which is the most hung on this Illini squad this season.

The bad news for Illinois is that you could have written the same thing after Minnesota beat up on the team in Champaign. Put simply, this is a bad defense that?s getting worse. Wisconsin not only shot well from the field, but also grabbed over 50 percent of its misses. Generally speaking, Bo Ryan is not known for building his teams around crashing the offensive glass, so that number is especially concerning. But then again, it?s not like the offense has been much better. Since its win over Gonzaga in Spokane, Illinois has scored more than 1.0 points per possession just once, against lowly Auburn. If you?re John Groce, what concerns you the most?

Wisconsin on the other hand, is quickly turning some doubters into believers. But the Badgers will face their toughest test of the season when they visit Bloomington tomorrow. Jared Berggren led the way in the victory with 15 points (13 shots) and 12 rebounds. Speaking of Mr. Berggren, it might be time to start talking about him as a potential conference player of the year:

Berggren compares favorably in terms of efficiency, and then you have to throw him some bonus points because he?s probably the best defender on this list, and indeed, the conference (send your hate email here, Hoosier and Buckeye fans). Offensively, I think Trey Burke still sits above everyone else, but that?s only one side of the coin.

The lone bright spot for Illinois on Saturday was D.J. Richardson?s 16 points on 11 shots. The Illini will look to regroup against Northwestern this Thursday at home.

On Sunday, Purdue took care of business at home with an 18-point win over Penn State. This was a putrid offensive performance by the Nittany Lions, who managed to score just 0.67 points per possession. Perhaps no statistic captures just how bad Penn State?s offense was than the fact that the team shot just 26 percent on two-pointers. For its part, Purdue?s offense was pretty bad as well, as the Boilers failed to reach the point-per-possession threshold, but it looked like the Showtime-era Lakers compared to PSU. Actually no, it looked ugly too. Certainly not the prettiest game to start off a Sunday.

Michigan State survived a scare from Nebraska in the late game on Sunday. Although it goes in the books as a 10-point win, it was much closer than that. But the real cause for nerves came in the second half when Branden Dawson?s surgically-repaired knee buckled as he went to finish on a breakaway. Dawson went to the locker room, but was at the scorer?s table just a few minutes later.

Although his team came up short, Tim Miles is starting to turn things around in Lincoln. Miles? track record suggests that he wants his teams to crash the defensive glass and get to the free-throw line. On the former, he?s already gotten the Huskers to buy in, as Nebraska is one of the better defensive rebounding teams in the nation. The free throw trips, however, have not yet come to fruition. Against the Spartans, Nebraska attempted just 8 free throws. So there?s still work to be done. Winning in Lincoln is not an easy task, but Miles just might be the guy that does it.

Finally, Iowa made it look easy in a win over Northwestern at Dying Magic Marker Court. The Wildcats couldn?t throw the ball in the ocean, as they shot 40 percent on twos and 19 percent on threes. Given the credo of Bill Carmody, that kind of shooting will end in a disaster for this offense. Iowa?s offense had no such problems against the always permissive Northwestern defense. Aaron White in particular was hyper-efficient, scoring 17 points on just 9 shots.

Iowa?s in-conference numbers still don?t look pretty after the big win, but that?s driven largely by the fact that the team opened play with games against Indiana, Michigan, and Michigan State. But with this road win, I like the chances of Iowa to reach at least 8 wins. That might be enough to get the Hawkeyes into the Dance, especially if Iowa State keeps on playing well (Iowa?s best non-conference win was over the Cyclones). That said, reaching 9 wins would all but guarantee Iowa an at-large spot, which means winning a couple of 50/50 games. Next Saturday?s tilt against Wisconsin at Carver Hawkeye is one such matchup.

But before the Badgers visit Iowa, they?ll stop in Bloomington to face the Hoosiers in what could be the best frontcourt battle you?ll see all season. Thursday features the other marquee game of the week, when Michigan takes a trip to Minneapolis.