Dienhart: My top 10 games for this week 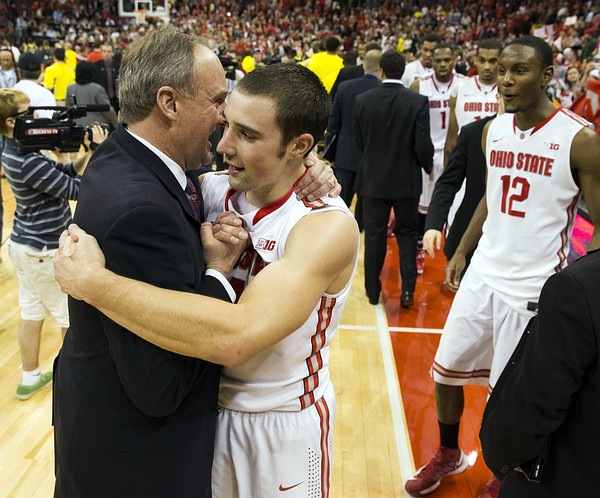 This is a good but not a great week of games in the Big Ten, with three notable matchups: Michigan at Minnesota, Ohio State at Michigan State, and Wisconsin at Indiana. Why? And how do I rank the  games this week?

For starters, it?s a statement week for Wisconsin, which is unbeaten in league action and has games at Indiana and at Iowa. In an odd twist, there is a non-conference game slipped in, with Bob Huggins and West Virginia coming to Purdue. This also is the week Penn State has its best shot at winning a Big Ten game, with Nebraska coming to State College.

Following is my ranking of this week?s Big Ten games.

1. Michigan at Minnesota¸ Thursday, Jan. 17. This will be a monster game to help shape the Big Ten race. Adding to the intrigue: Each team is coming off a tough loss on the road that saw each fall way behind before roaring back, with the Golden Gophers falling at Indiana and the Wolverines losing at Ohio State.

2. Ohio State at Michigan State, Saturday, Jan. 19. The Buckeyes have some mojo, coming off big wins at Purdue and vs. Michigan after that humiliating 74-55 loss at Illinois. (Did that really happen?) The Spartans also have some momentum coming off three consecutive wins. Ohio State will have little chance unless it can deal with Spartan big men Adreian Payne and Derrick Nix.

3. Wisconsin at Indiana, Tuesday, Jan. 15. Since that stunning 88-86 overtime loss to Butler, the Hoosiers have ripped off six wins in a row, including an impressive home victory over Minnesota on Saturday. The Badgers, a bit of a surprise at 3-0 in the Big Ten, are looking for a signature victory. And this would be it.

4. Wisconsin at Iowa, Saturday, Jan. 19. The Hawkeyes were reeling, opening Big Ten play with three consecutive defeats before winning in convincing fashion at Northwestern on Sunday. This may be a must win for Iowa, as it could use a quality victory. It won?t be easy, as the Badgers have won five a row and are looking to show they are an elite Big Ten team. Let's hope everyone keeps their shoes on.

5. Northwestern at Illinois, Thursday, Jan. 17. The Fighting Illini are coming off a drubbing at Wisconsin. A visit from an inconsistent Wildcats team that has lost three of four may be just what the doctor ordered for an Illinois team that started 12-0 but is 2-4 in its last six games.

6. West Virginia at Purdue, Saturday, Jan. 19. The Boilermakers are slipping in a non-conference game vs. a struggling West Virginia team. A win here would augment Purdue?s resume as it looks to build credentials for a postseason bid following a dreary non-conference season that saw the Boilers fail several noteworthy tests, including Bucknell, Oregon State, Villanova, Xavier and Notre Dame.

7. Purdue at Nebraska, Wednesday, Jan. 16. This will be the Boilermakers? first trip to Lincoln since the Cornhuskers joined the Big Ten. More importantly: It?s a chance to pick up another much-needed victory. But Nebraska is thinking the same thing as it searches for its first Big Ten triumph with star big man Brandon Ubel likely out a second game in a row with an elbow injury.

8. Indiana at Northwestern, Sunday, Jan. 20. The disciplined Wildcats will try to impose their will-and pace-upon the Hoosiers. And, it may work for a bit. But, Indiana is too good and too talented. And Northwestern is too challenged without Drew Crawford to keep pace with this scoring juggernaut.

9. Michigan State at Penn State, Wednesday, Jan. 16. With Tim Frazier-who is out for the season with an Achilles tendon injury-the Nittany Lions may have been able to hang for a while with the Spartans. Without Frazier, Penn State will get clobbered.

10. Nebraska at Penn State, Saturday, Jan. 19. This is it, America. This is the Nittany Lions? best chance to get a Big Ten triumph. Lose here, and offensively challenged Penn State may go 0-18 in league action. Really.