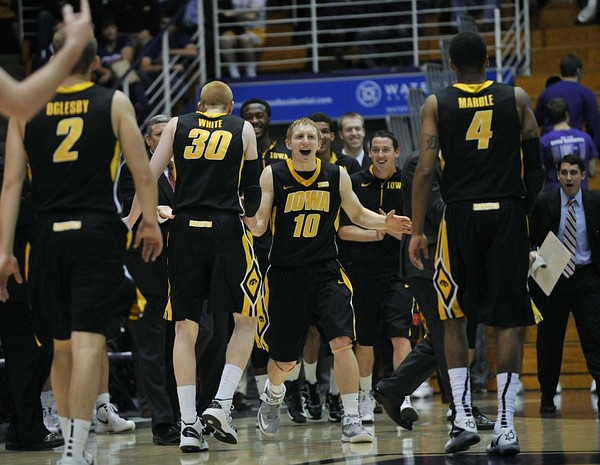 Aaron White led a balanced attack with 17 points as Iowa snapped a 3-game Big Ten losing streak with a 70-50 victory over Northwestern on Sunday afternoon. Josh Oglesby had 14 points, and Melsahn Basabe added 10 for the Hawkeyes (12-5, 1-3).

Iowa opened a 25-15 lead by halftime behind Roy Devyn Marble's eight points and steadily increased its lead through the second half.

Dunk No. 4 for Aaron White:

Aaron White adds an alley-oop to his day:

Aaron White gets another slam:

FINAL: Aaron White scored 17 points, grabbed six rebounds and handed out three assists to lead Iowa to a 70-50 win over Northwestern on Sunday at Welsh-Ryan Arena in Evanston. Melsahn Basabe shot 5-of-6 from the field and scored 11 points for Iowa (12-5). The Hawkeyes had 20 assists on 29 baskets. More Iowa scoring came from Josh Oglesby (14 points). Northwestern (10-7) shot just 29 percent from the field (15-of-51).

HALFTIME: Iowa leads 25-15 at halftime after locking down Northwestern's offense, holding the Wildcats to 21 percent shooting and just five field goals. The game was tied at 11 before the Hawkeyes scored the next eight points to create some distance. Iowa shared the ball, finishing with six assists on 10 field goals in the first half. Devyn Marble, back from a foot injury, scored eight points to pace nine Hawkeyes in the scoring column. Aaron White chipped in with six points. Dave Sobolewski's five points lead the struggling Northwestern offense.