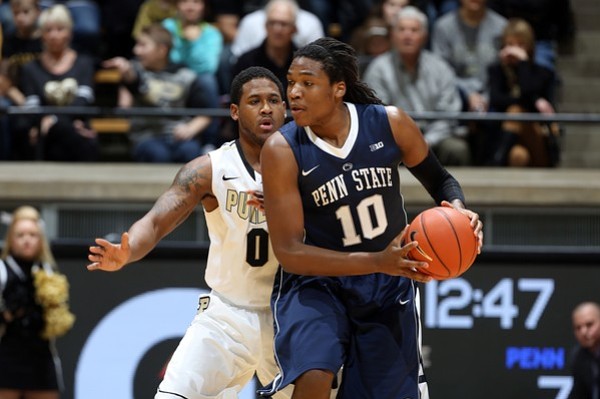 Brandon Taylor led Penn State with 11 points, but he was the only Nittany Lion to score in double figures

A.J. Hammons gets another block:

A.J. Hammons gets an early swat:

FINAL: Purdue used stingy defense to defeat Penn State 60-42 on Sunday at Mackey Arena in West Lafayette. The Boilermakers (8-8) held Penn State (8-8) to 26 percent shooting from the field and received a big double-double effort from A.J. Hammons (12 points, 10 rebounds). Purdue, which grabbed 19 offensive rebounds, also got double-digit efforts from Ronnie Johnson (13 points), D.J. Byrd (12 points) and Rapheal Davis (10 points). The Nittany Lions got a double-digit game from Brandon Taylor, who scored all 11 of his points in the first half.

HALFTIME: Purdue leads Penn State, 30-22, at halftime after making a late first-half run. The Boilermakers, who never trailed in the first half and led by as many as 11 points, led 21-19 when it used a 9-0 spurt to  make it a double-digit margin. Rapheal Davis leads seven Boilermaker scorers with seven points, while A.J. Hammons added six. The Boilermakers had seven offensive rebounds in the first half and tallied eight assists on 13 field goals. Penn State's Brandon Taylor leads all scorers with 11 points, including three on a halftime buzzer-beater from beyond halfcourt.