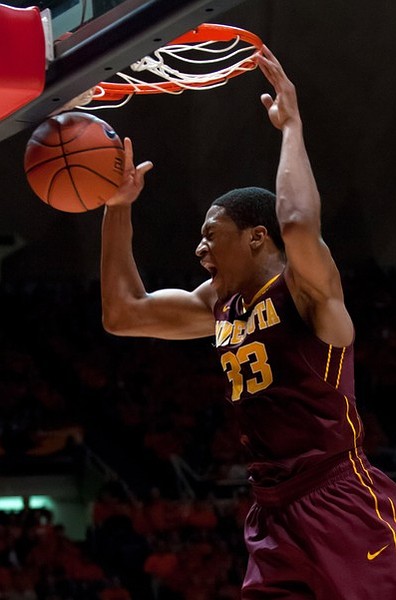 Minnesota?s full power and glory was on display during its romp over Illinois last night. So, let?s start there with the daily links, shall we? The Golden Gophers showed they are a true top-10 team that will compete for the Big Ten title-and thus a Final Four bid-with the 84-67 victory.

The win in Champaign-the Gophers? 11th in a row this season-was the start of a rugged three-game skein that sees Minnesota go to Indiana on Saturday before coming home to play Michigan on Thursday, Jan. 17. If the Gophers can get a split with the Hoosiers and Wolverines, it would be huge. When it travels to Indiana, Minnesota must deal with Victor Oladipo, who is having a breakout season. Check out some cool video of him. A big reason why Oladipo stays grounded amid his rising stardom? It?s the women in his life.

Aaron Craft or Shannon Scott at point guard for Ohio State? That?s the question Doug Lesmerises of the Cleveland Plain Dealer wrestles with.

The issue became pertinent during the win at Purdue, when Craft was on the bench for an extended stretch in the first half and Scott took over and ran the offense with aplomb. Craft is the guy, but coach Thad Matta may have a balancing act on his hands. And, having two quality point guards is a good thing, right?

Iowa coach Fran McCaffrey sent a clear message after the ugly loss at Michigan: A lack of toughness is unacceptable.

McCaffrey has gone so far as to say he would consider benching Iowa?s top two scorers - junior guard Devyn Marble and sophomore forward Aaron White - if they continue to lack toughness, especially on defense. Up next is a visit from ultra-tough Michigan State. This is gonna be interesting.

While talking Iowa, check out this look at the salaries of the assistant coaches. It even includes PDFs of each contract.

How often does a projected first-round draft choice eschew turning pro and come back to college? Not often. But, that?s exactly what Michigan offensive tackle Taylor Lewan did. The lure and appeal of being a BMOC one more time was too great to resist. And, that?s awesome!

My take: A battle between two teams seemingly of the same ilk. Huge game.

My take: Bottom line: The REALLY good teams find a way to win on the road.

My take: There?s one reason why to come back! The other: Win Michigan?s first Big Ten title since 2004.

DID YOU KNOW: New #PennState DC John Butler was once employed for two weeks as a defensive assistant by the Houston Texans.

My take: No I did not. But, I am not surprised. He?s a very bright and smart guy.

Beck is now the third highest paid coordinator in the Big Ten only behind Michigan's Greg Mattison and Ohio State's Luke Fickell. #huskers

My take: Well-deserved. That?s all I?m gonna say about that.

My take: Not sure what this means, but it?s pretty cool, huh?

JerShon Cobb admits he considered a transfer from #Northwestern, but: "This is where I wanted to be."

My take: I, for one, am glad he decided to stay. Too many people run from problems rather than staying and dealing with them.