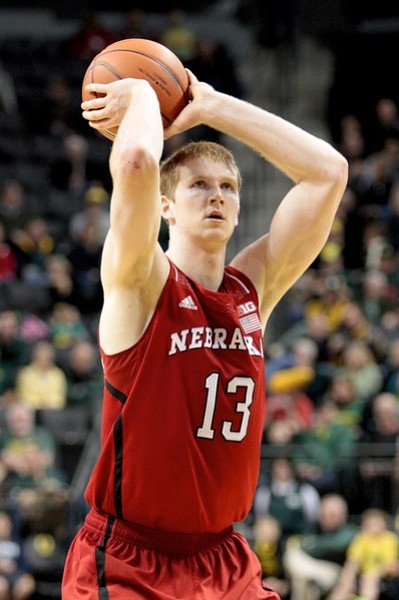 Brandon Ubel knows building a team is a process. That?s one reason why he relishes being a part of the construction of the Nebraska program under first-year coach Tim Miles.

There will be bumps along the way. Nebraska is 9-7 overall this year and 0-3 in the Big Ten with a visit to Michigan State on tap this Sunday. No doubt, visiting East Lansing will be a challenge. But the 6-10, 234-pound senior enjoys it.

Ubel has used challenges and doubters to fuel him during what has been a successful college career that not many could have envisioned when the Overland Park, Kan., native came out of Blue Valley West High. Ubel had few offers but none from nearby Kansas, Kansas State or Missouri. No matter, he matriculated to Lincoln, and has become one of the Big Ten?s most versatile big men, showing uncommon ability to run the court, play in the post and stick a three-pointer.

I caught up with Ubel, who was averaging 12.5 points and 6.6 rebounds entering the week, coming off the Michigan game as he and the Huskers prepped for the Spartans.

Q: What have you been pleased with so far this season?
A: We are a little disappointed record-wise. We think we dropped a couple of games early on in non-conference that we shouldn?t have dropped. These last two games-Wisconsin and Michigan-we have been right there the whole game, but we weren?t able to get the win. That was a little disappointing. We are playing hard and getting better, we think. And the wins will take care of themselves if we continue doing that.

Q: Is Coach Miles looking for you to be a leader?
A: No question. From day one, he has told me that I need to lead this team, scoring-wise, rebounding-wise or things off the court. In every aspect. I?ve embraced that role and done that to the best of my ability. I am happy with what I have done so far, but we need to get some wins. A lot of that will be based on things I need to improve on.

Q: What are some things you need to improve on?
A: Getting everyone on the same page defensively, making sure we all know our assignments and stay disciplined. Stuff like that. That?s huge stuff. One possession can mean the difference in the game. If one guy is out of position or doesn?t know his assignment, that?s on me. I have to do a better job of taking care of that kind of stuff. And personally, I need to start making some shots. I?m kinda in a little bit of a slump the last few games. I haven?t finished some easier plays. I just need to keep working and knock down some shots.

Q: Are you more the focus of defenses this year as opposed to last year?
A: Yes, I think so. Definitely. I?m aggressive, I?m getting to the rim, I?m looking for myself a lot more. That has turned into some good things for us. Obviously, opposing teams watch tape, so they know and see who is scoring and doing things on offense. So that definitely has been a change for me. People are focusing on me more, sending double-teams my way, stuff like that.

Q: What is your best move?
A: When I am playing the ?5? and being guarded by a ?5,? I like getting the ball in the high post and driving to the basket. That?s something I do pretty well. Not many ?5s? are used to guarding guys off the bounce, especially in an area like the high post where you don?t have much help. That?s something I have done a pretty good job at but need to keep improving.

Q: Do you like playing facing the basket or with your back to it?
A: Either way. I don?t really care. Whatever the defender isn?t used to. Against Michigan, if I was being guarded by Glenn Robinson, I liked to take him down low in the post. If a big guy like (Mitch) McGary or (Josh) Morgan was guarding me, I tried to take the ball outside. I take what the game gives me. I?m not gonna force things either way. That?s my approach, And staying aggressive all the time, too.

Q: How are things different under Tim Miles as opposed to Doc Sadler?
A: There is definitely a lot of differences. There are big-time differences, scheme-wise. The energy that Coach Miles brings every day, the things we do every day and his enthusiasm for what he is doing, that rubs off on us. We are excited to come to practice each day. We want to come to practice. We actually enjoy the few hours we spend in there. And you can see in the way we play. We are having more fun out there. We genuinely are enjoying what we are doing every single day.

Q: What?s the best part of the palatial news locker room opened last season?
A: I couldn?t even tell you. There are so many things. It?s a one-of-a-kind facility. The team lounge with five TVs, custom couch. I spend a lot of time on that couch. It?s about 6.5 feet deep, so it?s basically like a bed for most of us. Relax in there, lay down. If you wanna take a nap or spend the night, go ahead and do it. That?s probably my favorite part.

Q: How good is Michigan?
A: It?s a good team. They do a lot of good things. They get out in transition well. We did a good job limiting our turnovers and bad shots so they didn?t have those opportunities. Michigan has the talent and they play hard and play together. When you put all those things together, you have a team that can contend not just for a Big Ten title but a national title.

Q: What about Michigan State, the team you play on Sunday?
A: The way they crash the glass on the offensive end. Watching their game vs. Minnesota, those are two teams that really crash the glass hard. Their best offense isn?t necessarily their first shot. It?s coming off that offensive rebound, kick-outs, tip-ins, stuff like that. And they go hard every possession on the glass. So that?s something we definitely need to focus on and limit. It will be a tough a challenge.