No. 10 Minnesota gets road win over No. 13 Illinois 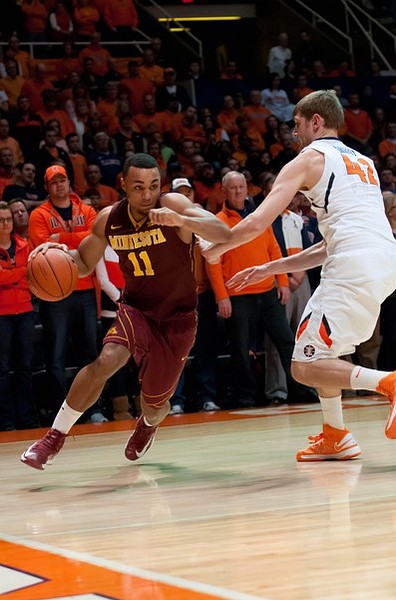 Joe Coleman scored 29 points and Andre Hollins added 19 to help No. 8 Minnesota top Illinois Wednesday 84-67 and remain undefeated in the Big Ten. The Gophers (15-1, 3-0 Big Ten) held off a charge by the 12th-ranked Illini midway through the second half. Joseph Bertrand pulled Illinois within at 44-42 on a short jumper with 12:37 left.

[ RELATED: Check out the Twitter love for Minnesota after win ]

But the physical matchup took its toll on the Illini (14-3, 1-2). And as Illinois piled up fouls, Trevor Mbakwe connected on layup with 6:15 to play for a 62-49 lead that Illinois couldn't overcome.

And our Minnesota-Illinois game highlight:

Joe Coleman flushes it down:

FINAL: Andre Hollins scored 22 points, grabbed nine rebounds and handed out six assists as No. 10 Minnesota defeated No. 13 Illinois 84-67 on Wednesday at Assembly Hall in Champaign. Joe Coleman had 29 points and shot 10-of-16 from the field to lead the Golden Gophers, who shot 53 percent from the field (27-of-51) and 56 percent from  long range (9-of-16). The Golden Gophers shot 21-of-27 from the free throw line. Trevor Mbakwe had a double-double for Minnesota. He scored 19 points, corralled 10 rebounds, and went 6-of-10 from the field.

HALFTIME: Trevor Mbakwe scored 13 points and grabbed seven rebounds for No. 10 Minnesota as the Golden Gophers lead No. 13 Illinois 34-30 at the half. The Fighting Illini shared the ball, finishing with five assists on eight field goals in the first half. The Golden Gophers hit four threes in the first half, shooting 50 percent from deep. Nnanna Egwu is putting together a nice game so far for Illinois. The sophomore has four points and six rebounds.