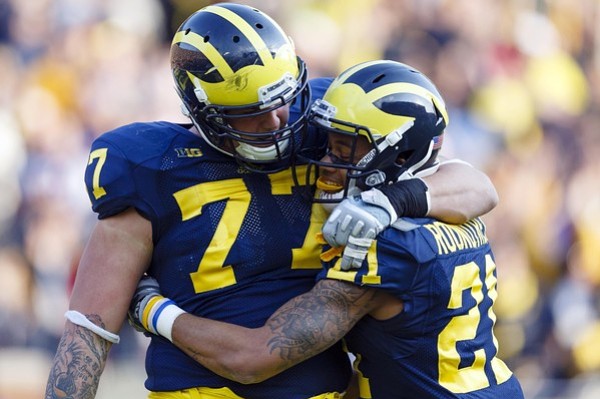 It was a surprise to some that Michigan offensive tackle Taylor Lewan opted to return for his senior season. But it?s great news for the Wolverines, as Lewan will be among the top linemen in the nation in 2013.

Most draft experts projected the 6-9, 309-pound junior to be a first-round pick coming off a season in which he was a consensus first-team All-Big Ten selection and voted the Big Ten offensive lineman of the year for an 8-5 Michigan team.

Lewan often dominated foes and held his own in a ballyhooed matchup with South Carolina defensive end Jadeveon Clowney in the Outback Bowl. Now, Lewan will have a shot to help lead Michigan to its first Big Ten title since 2004.

?It was a no-brainer in the end,? said Lewan about returning during a press conference tonight. He also consulted with former Michigan offensive lineman Jake Long about returning, which played a role in Lewan?s decision. ?Everything he said about staying at the University of Michigan went through my head countless times," said Lewan, who will take out an insurance policy in case of injury.

Lewan?s return is big for a Michigan line that must replace three starters from a unit that often struggled to get a consistent push in 2012. Left guard Ricky Barnum, center Elliott Mealer and right guard Patrick Omameh all are graduating. Right tackle Michael Schofield is back.

All eyes will be on the front in the spring. Kyle Kalis looks slotted for a guard spot. Others to watch are Erik Magnuson (tackle), Chris Bryant (guard), Joey Burzynski (center), Graham Glasgow (center) and Jack Miller (guard).

?We are excited as a program, as a team, to have Taylor's leadership and him coming back to finish his career at Michigan," Michigan coach Brady Hoke said.

Here's a look at the Big Ten players who have declared for the draft. The deadline is Jan. 15.