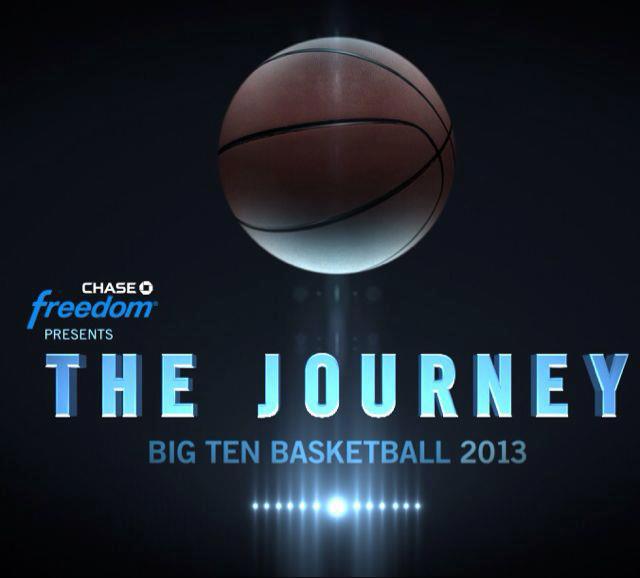 The Big Ten continues to lead all conferences with six teams ranked in this week?s AP and USA Today Coaches polls, including two top-five teams and five top-15 squads.

But come Sunday, fans will have another opportunity to learn just a little more about who these student-athletes really are, with the debut of the fourth season of "The Journey: Big Ten Basketball 2013," presented by Chase Freedom, at 8 p.m. ET.

All season long, The Journey travels to each campus to capture the action and the drama surrounding each program. The 10-episode series culminates with a one-hour special dedicated to the 2013 Big Ten Men?s Basketball Tournament in March.

?Our show strives to provide basketball fans with a look behind the curtain of all 12 Big Ten teams,? said Bill Friedman, coordinating producer, BTN Original Productions. ?We want viewers to learn more about the student-athlete wearing the jersey and to allow our audience to fully experience Big Ten basketball by providing access to locker rooms, practices and other places that only our cameras are allowed.?

The season premiere features Michigan State junior point guard Keith Appling, and his emergence as a team leader and a point guard. The show will also feature Indiana junior Victor Oladipo, who reacts to surprise comments from a two-time NBA champion he has tried to emulate. The episode will also profile Ohio State Men?s Basketball Coach Thad Matta, and a look at his hometown of Hoopeston, Ill., prior to his team facing the Illini in nearby Champaign. The Journey also goes behind-the-scenes with the Nebraska Cornhuskers and new Head Coach Tim Miles on their road trip to Ann Arbor to face Michigan, including footage form the team plane and in the visiting locker room.

With every new season - today?s seniors were freshmen when the show debuted - the producers look for different ways to capture the drama.  ?We plan on using some of the newest cameras on the market to capture incredibly compelling visuals of Big Ten basketball,? said Friedman. ?By using slow-motion effects and close-ups, we are trying to showcase Big Ten basketball in a compelling and cinematic manner.?

The Journey is BTN?s highest-rated original program. In 2012, the series earned a College Sports Media Award in the National Networks/ Professional category. The series was nominated for a National Sports Emmy in 2010 in the category of Outstanding Edited Sports Series/ Anthology.