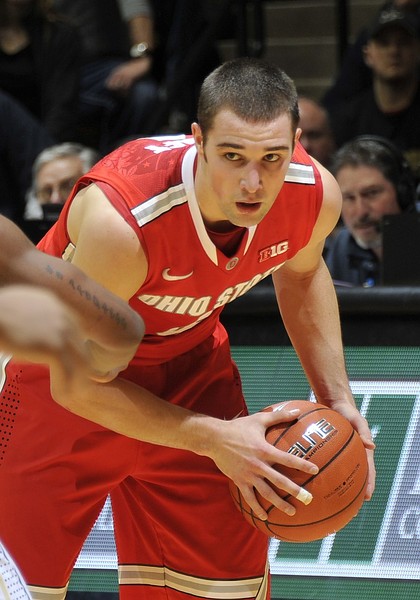 Ohio State picked up a solid road victory at Purdue last night, but the bigger story may be the point guard controversy simmering in Columbus.

After just five minutes of play, the Buckeyes' Aaron Craft  picked up his second foul and headed for the bench, with his team leading by a point. Replacement Shannon Scott would ignite the team, helping to grow a double digit halftime lead that Ohio State would not relinquish, despite some valiant efforts from the Boilermakers. Scott was excellent in many ways, but most impressive was his ability to create for others on the offensive end. Scott finished with eight assists against just one turnover, and it should be noted that four of his assists led to layups or dunks–the true mark of a creator.

Plus/minus can be a misleading statistic, especially with a sample size is as small as one game, but the numbers are interesting to note here:

With Aaron Craft in the game, the Buckeyes could make no headway, mostly because Purdue was scoring at an impressive clip. Don't get me wrong, Craft is a very good defender for his size, but we Geeks have long maintained that Craft's defensive impact on the game is vastly overstated. After all, if the supposed main benefit of Craft's pestering defense is turnover creation, why isn't Ohio State all that good at forcing turnovers? This game was a perfect example of that:

Purdue got up a shot on nearly every possession, regardless of Craft's presence, and this kept the Boilers in the game despite their usual shooting inaccuracy.

Now, this all may seem like a couple of Geeks picking on a solid player for no reason. After all, Craft truly is a good player, with his defense and distribution, and his scoring last night was very efficient (15 points on seven shots). He seems like an excellent teammate, a reliable solver of Rubik's Cubes, and all-around good guy. We've just grown weary of the hype for a good but rather limited player. It's not entirely clear that Craft is still the best point guard on his team, so it seems we should stop talking about him among the best in the conference, much less the nation. Ohio State posted an effective field goal percentage of 60, an impressive feat against a solid Purdue defense, but this is really nothing new to Thad Matta. Over the past four-plus seasons (156 games), Purdue has given up an effective field goal percentage that high just 11 times. Ohio State has accounted for five of those. On this night, it was easy twos that did the trick:

On average, D1 teams get about a third of their shots at the rim, and the  Buckeyes managed to push that to nearly 40 percent last night (with an above-average conversion rate as well). Craft, to his credit, made four of those made layups himself, while Scott made one of his own while assisting on four others. Deshaun Thomas accounted for the excellence away from the rim, as he scored 22 points on 13 shots, none of them layups or dunks.

On Monday, Indiana had no road difficulties in dispatching Penn State by 23 points. This had to be a refreshing performance for the Hoosiers, as their performance this season away from Bloomington has been less-than-stellar. In four prior road/neutral games, Indiana has had overtime games against solid but not great teams (Butler and Georgetown), a 13-point win over a bad Georgia squad, and a four-point win at Iowa. So, it's nice for the Hoosiers to convincingly crush somebody away from Assembly Hall, even if that somebody is a woeful Penn State squad. It was Indiana's defense that powered the blowout, as the Nittany Lions posted their lowest output of the season. Up next for Tom Crean's bunch is a big Saturday hosting of Minnesota.

Speaking of the Gophers, they visit Illinois tonight in a big game for both sides (8pm CT, BTN). The Illini will look to build on the solid rebounding displayed in the pasting of Ohio State, but it won't be easy, as Minnesota is the nation's top offensive rebounding team. Illinois will need to force turnovers and not get completely destroyed on the glass if it hopes to protect its home court. The appetizer to this game will be Michigan's hosting of Nebraska, which suffice it to say, is a massive mismatch on paper (6pm CT, BTN). As usual, we'll be live blogging the Wednesday night games, so drop by to join us.