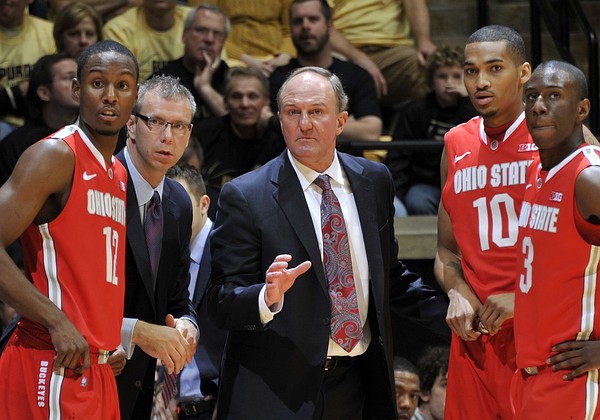 Deshaun Thomas scored 22 points to lead No. 14 Ohio State to a 74-64 victory over Purdue on Tuesday night. The angry Buckeyes (12-3, 2-1) rebounded from their first Big Ten loss by shooting 56.4 percent from the field. With the victory, Ohio State sent coach Thad Matta to his 100th Big Ten victory.

Ohio State, which took a 10-point halftime lead despite Aaron Craft playing just 4:19, has won four of the last five in this series and eight of their last 10 overall.

Rapheal Davis throws it down in transition:

FINAL: Deshaun Thomas scored 22 points and corralled seven rebounds to lead No. 14 Ohio State to a 74-64 win over Purdue on Tuesday at Mackey Arena in West Lafayette. Aaron Craft shot 6-of-7 from the field and scored 15 points for Ohio State (12-3). The Buckeyes shot 57 percent from the field (31-of-54). Ohio State also got a double-digit game from Evan Ravenel (13 points). A.J. Hammons had 13 points and grabbed seven rebounds for Purdue (7-8) in the game. Purdue also got double-digit performances from Ronnie Johnson (11 points) and Terone Johnson (18 points).

HALFTIME: Deshaun Thomas scored 14 points and grabbed four rebounds to lead No. 14 Ohio State to a 39-29 halftime lead at Purdue. The Buckeyes, who have led by as many as 14 points, dominated the boards (23-15) and own the double-digit lead despite losing Aaron Craft (2 fouls) for most of the first 20 minutes. Evan Ravenel added seven points and Lenzelle Smith Jr. chipped in with six points for the Buckeyes. Overall, seven Ohio State players have scored. Ronnie Johnson led the way for Purdue in the first half, with eight points.