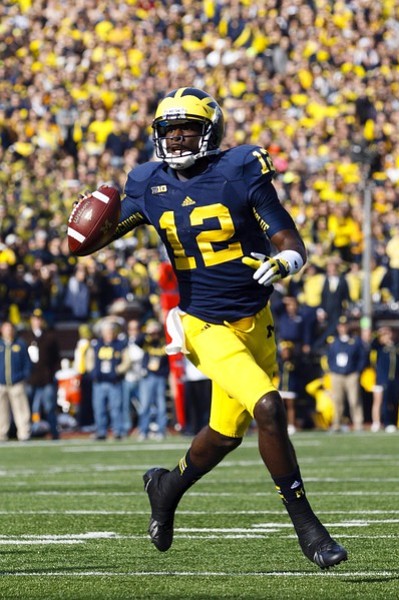 Still have football percolating on my mind as I open today?s edition of the daily links. Why not? The BCS national title game is tonight. Surely, Michigan wishes it was in Miami playing. But, it?s just a dream for now. If it?s gonna happen next season, it will be because of these 10 players, says Kyle Meinke of MLive.com.

Guess who is No. 1? That?s right: It?s quarterback Devin Gardner.

The deadline for opting to turn pro is Jan. 15. And several Big Ten players already have declared their intentions. But one guy who has said he?ll be back is Ohio State cornerback Bradley Roby.

Roby?s return was expected, even though he was projected as a possible late-first-round or -second-round selection. This is great news for a Buckeye defense that is suffering lots of attrition, with all four starting linemen, a cornerback and two linebackers already gone.

Wisconsin also got some good news when wideout Jared Abbrederis announced he would be back for his senior season.

Earlier, center Travis Frederick announced he was turning pro, so having Abbrederis back will be a boon to new Badger coach Gary Andersen. Abbrederis is the team?s top wideout after arriving as a walk-on. Linebacker Chris Borland and offensive lineman Ryan Groy also sought draft grades but opted to return to Madison, too.

Iowa apparently has moved quickly to fill an opening on its staff created when Erik Campbell departed by apparently tabbing D.J. Hernandez from Miami (Fla.), according to his Twitter feed.

But it?s not known if Hernandez, an offense G.A. at Miami, will coach tight ends or receivers, which Campbell coached.

Sam McKewon of the Omaha World-Herald thinks Bo Pelini the CEO has reached a crossroads in Lincoln. Nice read here.

McKewon says ?Pelini is CEO of a company that once flirted with bankruptcy. That company now produces steady, respectable returns. Five years ago, fans left Memorial Stadium in disgust. Now that stadium is expanding. Nebraska football is not a corrupt company. It promotes scholarship and humanitarian pursuits. A Husker doesn't turn down an autograph request. Family.?

All true. But everyone associated with the program wants more. That makes 2013 a potentially very interesting season.

Penn State fans are happy to have the mini-drama of Bill O?Brien?s flirtation with the NFL behind them. But David Jones of the Harrisburg Patriot-News said O?Brien?s aim isn?t more money. It?s more help.

O?Brien will need it, as he wades into the most daunting aspects of Penn State?s harsh NCAA sanctions that are highlighted by severe scholarship sanctions. Bottom line: The worst is yet to come. O?Brien knows that.

If you were in Illinois? Assembly Hall on Saturday, then you experienced the energy and juice that emanated from the place during the Fighting Illini?s rousing 74-55 win over an overrated Ohio State team that lacks a significant inside presence and consistent scoring.

Illinois needs to bottle that atmosphere-and effort-to remain a key player in the Big Ten.

Did you see Michigan take care of business in impressive fashion vs. Iowa on Sunday? Just awesome.

And Trey Burke looked fantastic. Is this guy the national player of the year? Time will tell. But we do know he?s having the most fun he?s ever had since arriving in Ann Arbor. And, it shows.

Iowa coach Fran McCaffrey couldn?t have been happy with the 95-67 loss at Michigan yesterday. But, he didn?t lose his cool.

In case you missed it, Minnesota?s Rodney Williams notched his 1,000 career point in a lopsided win over Northwestern on Sunday. Yet another milestone in his standout career.

So who's up for Ohio State-Oregon in either the national title game or Rose Bowl next season? Ducks I think have 15 starters back.

My take: Count me in!

My take: Yet another reason to hop on the band wagon!