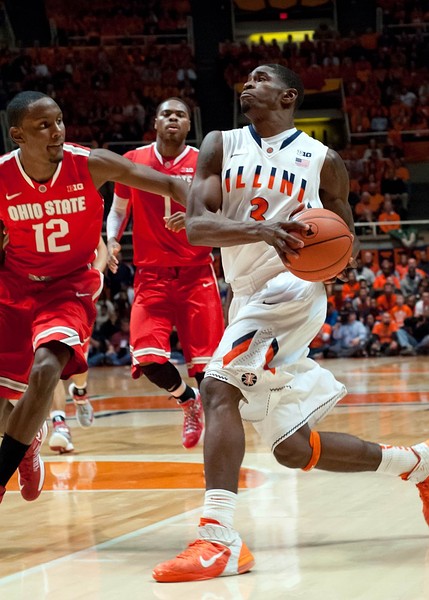 It seems ludicrous that a Geek would pose such a question concerning the No. 11-ranked team according to Ken Pomeroy, but it?s fair. While the Buckeyes still look good in the computer?s eyes, but the computer?s eyes aren?t going to determine things like whether Ohio State will be invited to the Dance and how it will be seeded. So far on the season, OSU has faced three quality opponents (Duke, Kansas, and Illinois), and they?ve lost them all.

In each of those three losses, the Buckeyes were led by Deshaun Thomas, who didn?t get much help from his teammates. In Saturday?s loss to the Illini, Thomas poured in 24 points (21 shots), while the rest of his team combined for 31 points (39 shots). The second option that Ohio State needs in support of Thomas hasn?t materialized yet. Thomas will get his-even if teams are understandably fixated on him-but his teammates need to punish those teams for that level of attention. If no one steps up as Robin, I fear this Buckeye team will not deliver on its promise.

For Illinois, it was a nice bounceback game after Purdue dominated the Illini on the glass. After the loss, John Groce put his team through a ?tough? practice with a special focus on rebounding. It appears to have worked-Ohio State captured just 22.5 percent of their misses, a far cry from the 44 percent that Purdue was able to secure. Nnanna Egwu had a career day, with 16 points and 8 rebounds (5 of them defensive). Time will tell if this newfound dedication to the glass holds up, but if it does, the Illini might yet live up to their lofty ranking. Indeed, this was a big win over a quality opponent despite the fact that the Illini shot under 30 percent from three. The Purdue game proved that Illinois can shoot well and still lose. This game proves that the team can shoot poorly from three, and still win.

In Saturday?s opener, Michigan State pulled away from Purdue late behind the efforts of Gary Harris. The freshman phenom had 22 points on 13 shots. This had to be an especially tough loss for Boilermaker fans, as Matt Painter diligently pursued Harris on the recruiting trail. Harris? mother actually played for the Purdue women?s team, and her jersey is hanging in the rafters at Mackey Arena.

Not only that, but another All-American Purdue recruiting target that ultimately chose Michigan State also played a key role in this game. Although he wasn?t that efficient from the field, Branden Dawson poured in 14 points to go along with 11 rebounds. Not only that, but he threw a punch at Travis Carroll. Michigan State?s sports information director denied the allegation, but I call them as I see them: Dawson threw a punch at Tacos (did it land? That, I don?t know).

This is becoming quite the rivalry of late, and I look forward to the Spartans? visit to West Lafayette. Things might turn out differently for the Boilermakers if A.J. Hammons can stay on the floor. The big freshman poured in 20 points on just 12 shots, which is quite the feat against over of the biggest frontlines in Division I. Hammons clearly outplayed the combination of Derrick Nix and Adreian Payne in just his second Big Ten game. Look for Purdue to continue funneling the offense his way.

Northwestern and Minnesota put up a 17-14 football score in the first half, but it was a different story in the second stanza:

Minnesota?s offense exploded in the second half, thanks in large part to Austin Hollins? five consecutive three pointers (watch all of them). The other part of the story was the offensive glass. Minnesota shot so well in the second half that there were only 16 available rebounds after a Gopher missed shot. And Tubby?s crew grabbed 11 of those.

While Northwestern is not exactly outstanding on the boards, Minnesota has been unstoppable on the offensive glass. Right now, the Gophers are recovering a full 50 percent of their missed shots. That?s good for tops in the country, and Frank Martin?s Gamecocks are far behind in second place.

Indeed, the difference in offensive rebounding percentage between those two teams is the same as the distance between #2 and #13. In fact, Minnesota has a long, long ways to decline in this area before they wouldn?t be the best offensive rebounding team since 1998 (and it likely goes back further than that, I just can?t find the data any further back). The likely challenger to Minnesota?s offensive rebounding greatness is the 2000-01 Michigan State team, which was one of those Flintstones Final Four teams. That team grabbed 46.6 percent of its misses, and Minnesota is now at 49.7.

Next up is Illinois, a team that-notwithstanding its last game-is weak on the defensive glass. Minnesota may yet push that number even higher.

Also this past weekend, Wisconsin survived on the road against a pesky Nebraska squad. This wasn?t just a slow game, it was ugly too, as neither team managed to score even 0.85 points per possession. Jared Berggren was the relative bright spot for the Badgers, pouring in 13 points on 13 shots (emphasis on ?relative?). The Huskers actually had three players score in double figures, but Wisconsin?s excellent defense took a lot away.

Indeed, I figure there?s a lot of hand-wringing in Madison right now, and it probably is deserved. This Wisconsin team has real problems shooting, and about the only thing the Badgers do well (and very well) is take care of the basketball. Indeed, this is sort of like a bad version of last year?s offense, which wasn?t very good in conference play. The good news is that Wisconsin?s defense is rounding into form. Bo Ryan?s approach is to avoid fouling, run teams off the three point line, and crash the defensive glass. The intended result is to make the opponent rely almost solely on two pointers-and as few of those as possible. Whether the defense is good enough to make up for the lagging offense will be tested over the next 11 games, which features all but one of the ranked opponents on the remainder of Wisconsin?s schedule.

Finally, Michigan blasted an Iowa team to the tune of 95 points in 67 possessions. This is the second game in a row that has made me question the supposed defensive improvement of the opponent. On paper, Iowa still looks better than it did last year in this regard, but this is a troubling game, to say the least. At this point the Wolverines are playing like the difficulty is set on ?Rookie.?

UM has made nearly 60 percent of its twos, and over 40 percent of its threes. And if that wasn?t enough, the team never turns it over. As per usual, Trey Burke led the way with 19 points (10 shots) and 12 assists against just one turnover. But in reality, any Wolverine that saw at least 15 minutes on Sunday had an awesome game. This was the type of game I would live for as a former mop-up player.

Conference play continues this week, but a couple of games stand out. Fist, Ohio State will try to pick up a quality win on the road when it visits Purdue on Tuesday, and Illinois? newfound dedication to the defensive glass will be tested to its limits when it hosts the Gophers on Super Wednesday on BTN.