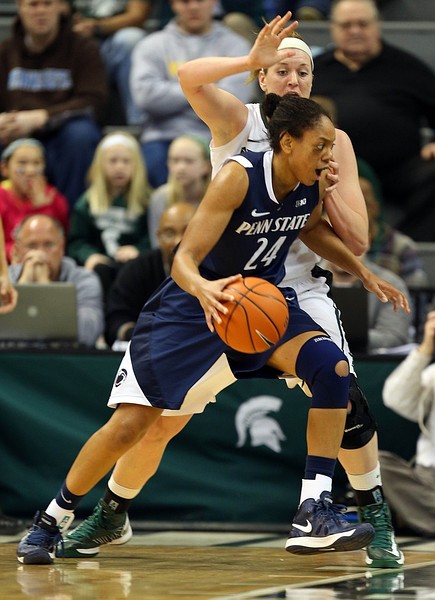 There were a handful of Big Ten women's basketball games Sunday, including No. 9 Penn State dropping Michigan State, 76-55, on BTN. Michigan also won, topping Iowa, to move to 13-2, the team's best start in program history. Catch up on all of Sunday's action in this post.

Indiana 68, Northwestern 64: BOX | RECAP
Aulani Sinclair poured in 31 points and Simone Deloach skied for a career-high 15 rebounds to lead Indiana past Northwestern on Sunday afternoon, 68-64. The win gave IU its first Big Ten victory of the season. Jasmine McGhee added 14 points in the effort for the Hoosiers

Illinois 79, Ohio State 73: BOX | RECAP
Senior forward Karisma Penn scored a career-high 34 points and pulled down 12 rebounds to propel the Illinois to a 79-73 win over Ohio State at Value City Arena on Sunday. Penn made a school-record 16 free throws in 17 attempts as part of her second 30-point outing of the year, and the Illini were unconscious from the free-throw line, shooting 88.2 percent (30-of-34) from the stripe.

No. 9 Penn State 76, Michigan State 55: BOX | AP RECAP
Nikki Greene scored 14 points and grabbed 10 rebounds to lead No. 9 Penn State to a 76-55 win over Michigan State on Sunday. The backcourt of Dara Taylor, Alex Bentley and Maggie Lucas also produced 43 points for the No. 9 Nittany Lions (12-2, 2-0 Big Ten) against the nation's second-ranked scoring defense. Becca Mills had 17 points, including three 3-pointers, for the Spartans (13-2, 1-1).

Minnesota 60, Wisconsin 55: BOX | RECAP
The University of Minnesota (12-4, 1-1 B1G) women's basketball team picked up its first road win of the season with a 60-55 victory at Wisconsin (8-7, 0-2 B1G) Sunday afternoon in Big Ten Conference action from the Kohl Center in Madison, Wis.