After slow start, No. 13 Minnesota rolls past Northwestern 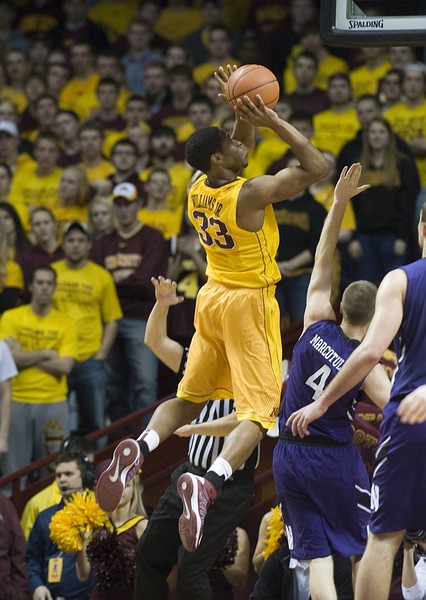 Austin Hollins hit five 3-pointers during an impressive three-minute stretch in the second half (watch the barrage in featured video), finishing with 19 points and sparking No. 13 Minnesota to a 69-51 victory over Northwestern on Sunday night.

Trevor Mbakwe gets the swat and slam:

Alex Olah fakes the pick and rolls for slam:

FINAL: Austin Hollins scored 23 points and grabbed three rebounds to lead No. 13 Minnesota to a 69-51 win over Northwestern on Sunday at Williams Arena in Minneapolis. Minnesota hit 50 percent of its field goals (23-of-46) and still grabbed 22 offensive rebounds. Jared Swopshire had six points, grabbed five rebounds, and dished out three assists for Northwestern (9-6) in the loss. The Wildcats struggled from the floor, shooting 39 percent (20-of-51). Northwestern got double-figure scoring from Reggie Hearn (11 points) and Dave Sobolewski and Tre Demps, who each scored 10.

HALFTIME: No. 13 Minnesota held Northwestern's offense to 28 percent shooting, helping the Golden Gophers to a 17-14 halftime advantage. Minnesota dominated on the glass in the first half, outrebounding the Wildcats 23-10. The leading scorers on both sides have been held in check so far. Neither Minnesota's Andre Hollins nor Northwestern's Reggie Hearn have been able to get going as the two have gone for two and zero points, respectively.