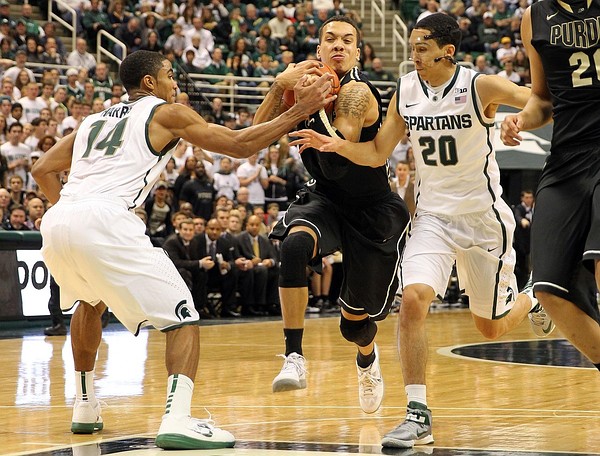 Freshman Gary Harris scored a career-high 22 points, and No. 18 Michigan State used a 28-7 run in the second half to pull away for an 84-61 victory over Purdue on Saturday. The Spartans (12-3, 1-1 Big Ten) missed their first 10 shots from the field after halftime, but it didn't much matter in what quickly became a free throw contest.

Branden Dawson had 14 points and 11 rebounds for the Spartans, who bounced back from a loss at Minnesota in their conference opener.

A.J. Hammons throws it down:

FINAL: Gary Harris went 7-of-13 from the field and led five Michigan State players in double digits with 22 points as the Spartans defeated Purdue 84-61 on Saturday at the Breslin Center. No. 18 Michigan State also got double-digit contributions from Branden Dawson (14 points), Travis Trice (12), Denzel Valentine (11) and Derrick Nix (10). Michigan State (12-3) shared the ball to the tune of 20 assists on 29 baskets and secured 16 offensive boards. A.J. Hammons contributed 20 points, pulled down six rebounds, and went 8-of-12 from the field for Purdue (7-7) in a losing effort.

HALFTIME: In a back-and-forth first 20 minutes, No. 18 Michigan State goes to the locker room leading Purdue, 36-30. The Spartans trailed 26-25 when they broke out for a 7-0 run to overtake the Boilermakers. Michigan State fired often and fired with accuracy from distance, hitting 56 percent (5-of-9) of its three-point attempts. The Spartans shared the ball, finishing with 11 assists on 15 field goals in the first half. Michigan State's Gary Harris had a big first half, with 11 points, and Travis Trice added eight and three rebounds. D.J. Byrd led the way for Purdue in the first half, with 11 points and four rebounds.