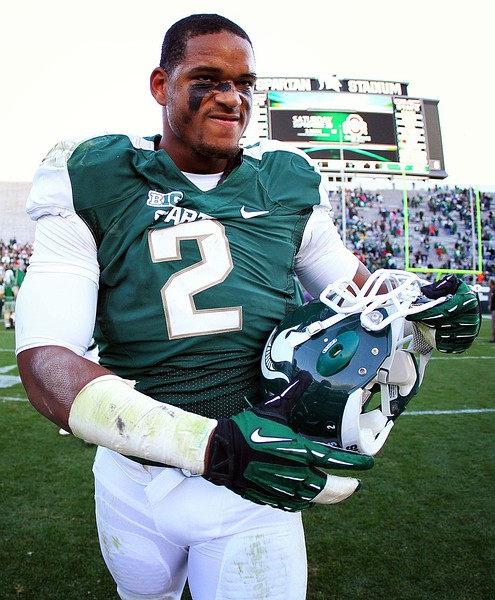 Like Bell, it isn?t a surprise that Gholston turned pro. But he?s doing so after a so-so junior season that saw him notch just 3.5 sacks and 12 tackles for loss en route to earning second-team All-Big Ten honors from the media and honorable mention from the coaches.

Entering 2012, Gholston was tabbed by many to be the Big Ten?s preseason defensive player of the year. Alas, he was dogged by inconsistency all season.

Sims? departure is more of an eyebrow raiser. The 6-5, 285-pound junior enjoyed a breakout 2012, grabbing 36 receptions for 475 yards and two scores. He had one catch prior to this season.

?Although we?ll miss Dion in our offense next season, he felt the timing was right and we wish him all the best in his future," Michigan State coach Mark Dantonio said in a statement. "Since returning to Michigan State, our offensive system has helped develop two tight ends that are currently playing in the NFL, in Kellen Davis (Chicago Bears) and Garrett Celek (San Francisco 49ers), so there?s a proven track record of our players having success at his position at the next level.?

Sims is a specimen who showed blocking skills, but he?s a raw commodity. He played as a true freshman in 2009, redshirted in 2010 and then played again the past two seasons. A broken hand hampered him in 2011.

Sims leaves with 56 catches for 683 yards and eight touchdowns in 38 career games, including 12 starts.