Follow who's up & who's down in Big Ten hoops 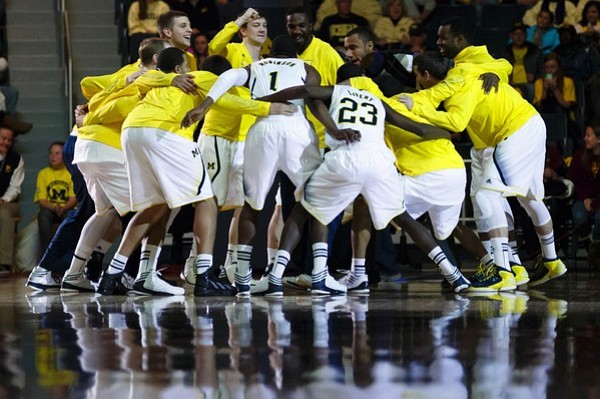 Welcome to the first installment of ?Three Pointers,? a fun, informative and informal spin around Big Ten men's basketball every Friday afternoon. There is a lot to explore with the start of Big Ten action this week. Early signs indicate the conference will be as good as advertised, as six Big Ten teams are ranked in the Top 20. And four are in the top 13.

The early-front-runner? It?s Michigan, which is off to its best start since 1985-86 looks to have its best team since the Fab Five era produced consecutive trips to the national championship game in 1992 and 1993. But Indiana, which began the season ranked No. 1 in the nation before falling to Butler, is every bit as legit as the Wolverines. And everybody?s favorite dark horse is Minnesota, which could make a push to the Final Four for the first time since that magical ride in 1997.

THREE STOCKS TO BUY
1. Michigan. Since Indiana?s loss to Butler, the Wolverines have emerged as the pick of many to win the Big Ten. Hard to argue that notion. Michigan is one of just four unbeaten (Duke, Wyoming, Arizona) in the nation. And it looked utterly and thoroughly dominating in crushing Northwestern last night, 94-66.
2. Indiana. The Hoosiers showed their toughness and grit by grinding out a 69-65 win at Iowa. That?s what championship-caliber teams do-win games they are supposed to win, especially on the road.
3. Minnesota. This may be the third-best team in the Big Ten. Really. Tubby Smith has a deep and experienced squad. Yes, shooting can be an issue at times-as can turnovers. Still, this team hits the offensive glass with ferocity, plays defense and is athletic. You?ve been warned, Big Ten. Still, I wanna see how this team does on the road vs. quality foes.

THREE STOCKS TO SELL
1. Illinois. The loss at Purdue was the Fighting Illini?s second in three games, taking a lot of the air out of that 12-0 start. It looks like the book on how to beat Illinois is out for a team with an over-reliance on the three-pointer and nary an inside presence. Those wins over Gonzaga and Butler seem like eons ago, don?t they?
2. Nebraska. God bless Tim Miles. He is gonna try. Really, he is. But he has the least talent in the Big Ten. And this is a horrible year for that. Bottom line: The Huskers may be staring at an O-fer in Big Ten play.
3. Northwestern. The Wildcats? dreams of ending that dubious NCAA drought likely went down the drain when Drew Crawford went down with a season-ending shoulder injury. This team just lacks enough scoring bit to keep pace with the better squad.

THREE THINGS I LEARNED
1. Cody Zeller is good. But Victor Oladipo has been Indiana?s best player thus far. Oladipo is an uber-athletic wing who can run the court, shoot, get his own shot, rebound and defend. Simply put: There is no more complete player in the Big Ten.
2. We all figured Wisconsin was gonna struggle without point man Josh Gasser, who is out for the season with a knee injury. And we saw just how vulnerable the Badgers are last night, as they barely scrapped by Penn State at home, 60-51.
3. Don?t count out Purdue. The Boilermakers went 6-6 in non-conference play with losses to likes of Bucknell, Eastern Michigan and Oregon State. But the win over the Illini on Thursday showed the team that it can succeed if it plays hard, defends, rebounds and can just hit a few three-pointers.

THREE IMPRESSIVE WINS
1. Indiana 69, Iowa 65. This was a gritty win by Indiana in a tough environment. And the Hoosiers found a way to prevail even though Jordan Hulls went 0-for-10 from the field and didn?t score. This is a deep team. This is a determined team. This is a great team. It?s probably good the Hoosiers already have a loss. They didn?t need that pressure.
2. Minnesota 76, Michigan State 63. If the Golden Gophers are a legit Big Ten contender and Final Four sleeper, it has to win games like this on its home court. Even better: Minnesota traded punches with Michigan State, and despite falling behind by five points midway through the second half, responded to card an double-digit win.
3. Michigan 94, Northwestern 66. This was the Wolverines? most lopsided Big Ten road triumph since whipping Wisconsin by 44 in 1964. Trey Burke had 23 points-he could have had 40-and Tim Hardaway, Jr., notched 21 for the No. 2-ranked Wolverines. Find me a better guard tandem. You can?t, so don?t try.

THREE GAMES TO LOOK FORWARD TO
1. Iowa at Michigan, Sunday, Jan. 6 on BTN/BTN2Go. The Hawkeyes continue a brutal start to the Big Ten season that saw them open with a home loss to the Hoosiers. Now, a trip to Ann Arbor to face the No. 2 Wolverines. A visit from Michigan State looms after that.
2. Ohio State at Illinois, Saturday, Jan. 5 on BTN/BTN2Go. Live by the 3; die by the 3. That looks like it will be Illinois? lot this season. But the wheels are threatening to come off the Fighting Illini?s 12-0 start, as they have lost two of their last three games. A home victory over the Buckeyes would be an elixir to the Illinois? blues. Illinois beat Ohio State last year in Champaign, as Brandon Paul tallied 43. Hmmm.
3. Michigan State at Iowa, Thursday, Jan. 10. The Spartans already have lost one tough road game in league action, at Minnesota on Monday. Will they lose another? The Hawkeyes also need to establish their home court after letting Indiana come into Carver-Hawkeye and win on New Year?s Eve.

[ SCOREBOARD: Look back at past results and ahead to future games schedules. ]