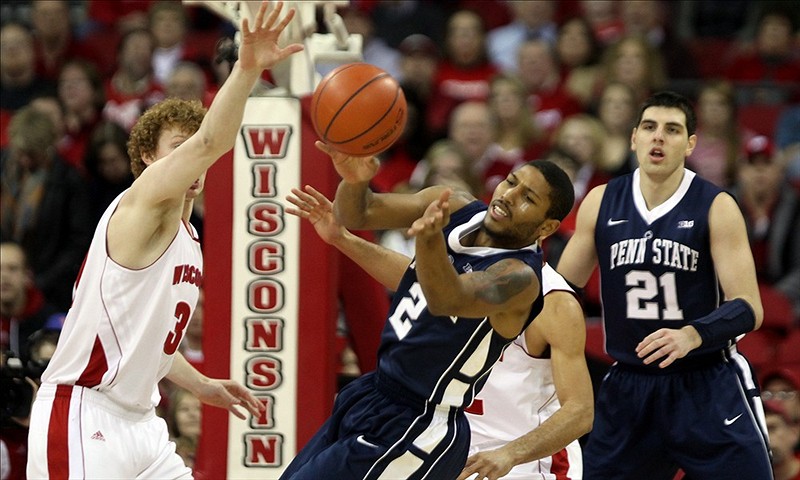 FINAL: Mike Bruesewitz sparked the Badgers, as he scored 12 points, yanked down eight rebounds, and had three assists in the win. Jared Berggren was 5-of-7 from the floor and chipped in 13 points for Wisconsin. The Badgers struggled from the floor, shooting 39 percent (22-of-57). Wisconsin was able to secure 19 offensive boards. The Badgers also got double-digit efforts from Ryan Evans and Ben Brust, who each scored 13. Jermaine Marshall scored 19 points, corralled three rebounds, and went 9-of-14 from the field for Penn State (8-5) in the loss. The Nittany Lions also got a double-digit game from D.J. Newbill (12 points). Free throws played a key role in the outcome, as Wisconsin not only went to the line 25 more times than Penn State, but made the most of its opportunities, shooting 13-of-26. The Nittany Lions committed 23 fouls and made 0-of-1 free throw attempts.

HALFTIME: Wisconsin held Penn State's offense to just nine first-half field goals, and the Badgers lead 29-18 at halftime. The Nittany Lions led 16-14 when Wisconsin went on a 15-0 run to take a 13-point lead. Penn State goes into the break with the offensive rebounding advantage, with six to the Badgers' nine. Ryan Evans led the way for Wisconsin in the first half, with eight points and four rebounds. Penn State's Jermaine Marshall already has eight points.