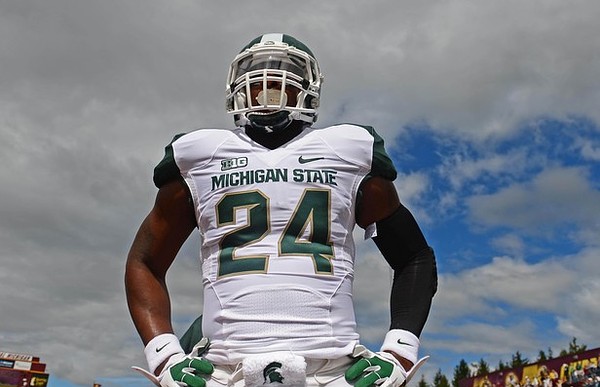 Please tell me you aren?t shocked by news that Michigan State running back Le?Veon Bell is going pro a year early. Running backs have only so many carries in their body. And Bell already has used up a lot of them at Michigan State. In three years, he ran 671 times for 3,346 yards and 33 touchdowns. He also caught 78 passes, which surely will impress NFL scouts.

As hard as it was to leave spartan nation, it was even harder to pass on such a great opportunity I have in front of me!

But I love and thank spartan nation for everything! I will always be a Spartan!

The 6-2, 244-pound junior was the ultimate workhorse this season, as he currently leads the nation with 382 carries and was the lone constant for a Spartan offense that often struggled during a disappointing 7-6 season. Bell ran for over 200 yards three times in 2012 (Boise State, Eastern Michigan, Minnesota) and had 145 in the Buffalo Wild Wings Bowl win over TCU.

[RELATED: Look back at all of our Le'Veon Bell coverage. ]

Bell paced the Big Ten in rushing with 1,793 yards rushing to go along with 12 touchdowns. He caught 32 passes for 167 yards for the Spartans, who also may see defensive end William Gholston and tight end Dion Sims bolt early. The deadline is Jan. 15.

Without Bell and with Larry Caper graduating, Michigan State will look to juniors-to-be Nick Hill and Jeremy Langford at running back. Hill ran for 48 yards last season; Langford 23. Newcomers also could be a factor.

On Saturday, Bell spoke with BTN's Lisa Byington after the Spartans' bowl game victory. Back then, Bell said, "It?s going to be a hard decision, one of the toughest decisions of my life. I just want to make sure I do it the right way, and we?ll see what happens.? Watch the video here.

Check out these Bell photos, too.