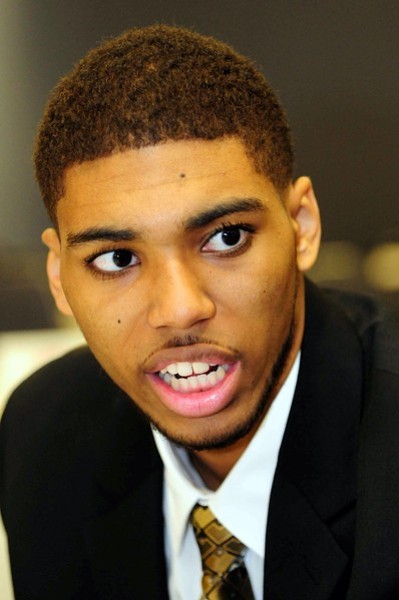 The time is now for Iowa?s Roy Devyn Marble. This is his Hawkeyes team. He must be a leader and he must show the way if the program is to reach the NCAA tournament for the first time since 2006.

Iowa is 11-3, but it needs to enhance its resume. The Hawkeyes played a soft non-conference schedule, and they missed a chance for a big season-opening conference win on Monday when they fell at home to Indiana, 69-65. Marble?s struggles played a role in the defeat, as he hit just 1-of-14 shots en route to tallying 14 points. He knows he must do better when the Hawkeyes wade into unbeaten and No. 2 ranked Michigan this Sunday (noon ET on BTN/BTN2Go).

The lithe 6-6 junior paces Iowa with a 15.6-point scoring average, while also averaging 4.5 rebounds and 2.9 assists for an Iowa team in its third season under Fran McCaffrey. Marble will need to have a big game if Iowa hopes to leave Ann Arbor with a win.

I caught up with Marble, the son of Iowa?s all-time leading scorer Roy Marble, before a recent practice to get his views on this year?s team, how he has improved and variety of other topics.

Q: What have you liked about the way you have played?
A: As a team, I like the fact we are very unselfish. Having the two new point guards, (Anthony) Clemmons and Mike (Gesell), has really freed me up offensively. I?ve been able to get better shots and get open a little more than I was last year.

Q: What have the freshmen point guards meant to the team? Did you envision them having this type of impact?
A: I kinda did. I think (Clemmons) as come along farther than I expected. But Mike hasn?t done anything I didn?t think he could do coming into the season. He was a highly-recruited point guard. He has a high basketball IQ and worked hard during offseason workouts. It was then, getting to know him and playing with him, I could tell he was going to be ready to play for us right away. (Clemmons) has the ability and talent, but he has grown in his knowledge of the game from when he came until now. And he keeps getting better.

Q: How are things different for the team in Year Two under Coach McCaffrey?
A: I think everyone has gotten the system down. We are running in transition better than we have the past two years. We are working and executing our sets better. And we are getting better at all that each day. And we also have come a long way defensively. I think this is the best defense we have played under Coach McCaffrey since he has been here. I?m pretty proud of the guys, and we have to keep it up.

Q: What are some areas you still want to improve at this year?
A: We have to continue to rebound, especially in the Big Ten with how physical it is with teams like Ohio State and Michigan State and Indiana. We also need to keep up the defensive intensity for 40 minutes. That?s always gonna be a challenge for any team, playing hard and keeping the foot on the pedal for 40 minutes. I feel like offensively, we are a pretty good team. We are going to be able to score the basketball, but we are going to have to get stops. Rebounding and getting defensive stops will be the big keys down the stretch of the Big Ten schedule.

Q: How often do you talk to your father?
A: We talk every day. I have a pretty good knowledge of the game. Every now and then, he gives me tips and stuff. But he typically lets me do my thing and lets the coaches coach me and do what they do.

Q: What would it mean to get Iowa to the NCAA tourney for the first time since 2006?
A: It would mean a lot for us and the fans and everyone associated with Iowa and who supports us. It has been a long time. I feel like if we don?t make it, it will be disappointing. We came into the season with that goal. And we are sticking to it. We know what it?s gonna take. Right now, we are taking each game one at a time and not looking past anybody.

Q: Who is the best shooter on the team?
A: I always feel like it is me, regardless of who is on the court. One of the guys who if he gets hot is really hard to guard is Josh (Oglesby). When he is making shots in practice, he?s one of the toughest people to guard. He comes off screens really well. He reminds me a lot of Matt (Gatens) in how he would shoot. It?s gonna hit for him one of these games coming up soon. Once he does, I think he?ll unleash himself as one of the most pure shooters in college basketball.

Q: How big is this game at Michigan?
A: It?s a big game for us. Anytime you are chasing a Big Ten title, you don?t want to start 0-2. That would be a difficult hole to come back from, especially in a league as good as this. It also is a big game for us just for our confidence. If we can get a win vs. the No. 2 team in the nation in their house, that would do wonders for our confidence. Hopefully, we can do that.

Here are Marble's stats to date: