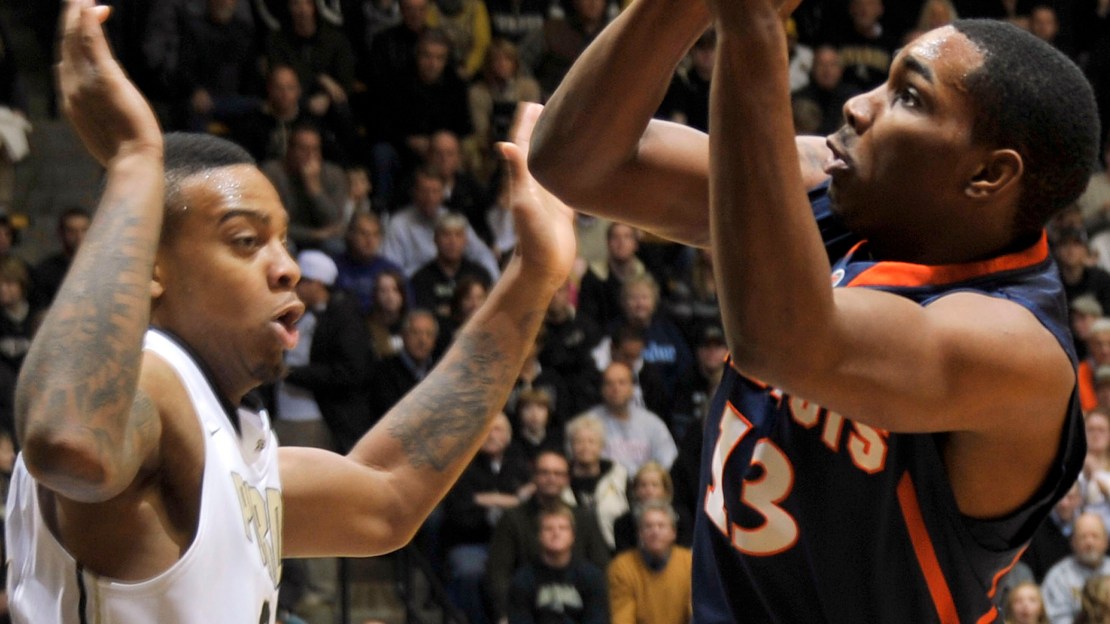 Terone Johnson scored a career-high 25 points and D.J. Byrd spurred a key 19-3 second-half run to send Purdue past No. 14 Illinois 68-61 on Wednesday night. The Boilermakers (7-6, 1-0 Big Ten) are above .500 for the first time this season and have won eight straight over the Fighting Illini.

Illinois (13-2, 0-1) was led by Brandon Paul with 15 points and Joseph Bertrand with 14, not quite enough to prevent an eighth straight conference loss on the road.

Tyler Griffey throws it down:

FINAL: Terone Johnson scored 25 points, grabbed nine rebounds and handed out four assists to help Purdue past No. 14 Illinois 68-61 in an upset on Wednesday at Mackey Arena in West Lafayette. Purdue (7-6) was tough on the offensive boards, grabbing 19, and also received double-digit efforts from Jacob Lawson (10 points) and D.J. Byrd (15 points), who came up with a pair of clutch plays in the final seconds. Brandon Paul scored 15 points, pulled down three rebounds, had three assists, and shot 4-of-6 from long range for Illinois (13-2) in the game.

HALFTIME: A close first half that saw the lead switch hands five times ended with No. 14 Illinois on top of Purdue, 33-31. The Fighting Illini led 21-15 when the Boilermakers went on a 7-0 run to take a one-point lead.Seven Purdue players scored in the half, led by Terone Johnson's 13 points. The junior also added four rebounds. Illinois' Joseph Bertrand already has 12 points and four rebounds. Brandon Paul scored seven points despite battling foul trouble.