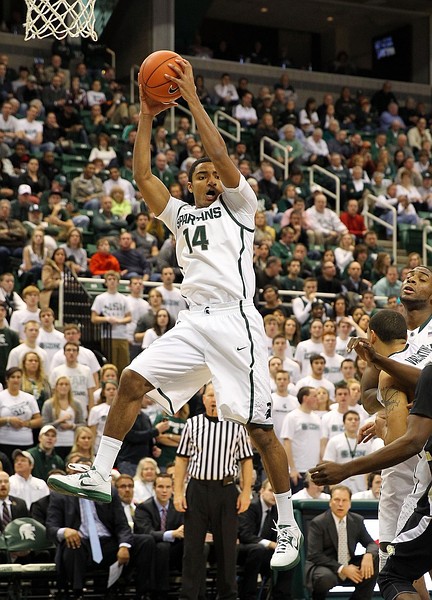 The Big Ten has a nice collection of freshmen who already are making a big impact. Michigan has the best group, with the likes of Mitch McGary, Glenn Robinson III and Nik Stauskas already shining.

In this week?s Super Seven, I take a look at the Big Ten?s best freshman to date. Vote for your No. 1 freshman at the bottom of this post.

1. Nik Stauskas, Michigan. The Wolverines may have the best collection of freshmen in the Big Ten. Glenn Robinson III and Mitch McGary got the headlines entering the season, but Stauskas is emerging as perhaps the best newcomer in the class, ranking third on the team in scoring (13.8 ppg). He has quickly become one of the top 3-point shooters in the Big Ten (56.5 percent), giving this great team another weapon. See his full stats.

2. Yogi Ferrell, Indiana. He wears No. 11, reminiscent of former Indiana great Isiah Thomas. But Yogi is fashioning his own way-and so far, he has impressed, averaging 6.6 points, 3.4 rebounds and 5.4 assists. While Ferrell?s shot still isn?t falling with consistency, he?s starting to heat up. But when it comes to driving the lane, Ferrell has excelled. He has a frighteningly quick and explosive first step and killer handle that makes him deadly off the dribble. See his full stats.

3. Gary Harris, Michigan State. The silky smooth wing from the Indianapolis area already has dealt with an injury that cost him a few games. But when the 6-4 Harris has played, he has fulfilled his hype as shooter, while showing a knack for getting to the basket. Harris is averaging 12.3 points and has a nice mid- and long-range game. Denzel Valentine, a 6-5 wing, also has had a nice impact, averaging 6.0 points. See his full stats.

4. Glenn Robinson III, Michigan. The son of former Purdue All-American and 1994 national player of the year, Glenn Robinson III is a smooth operator on the wing who already is pouring in 12.1 points and averaging 5.9 rebounds. The 6-6 Robinson has a nice all-around game and developing stroke that has to make his father proud. See his full stats.

5. Mike Gesell, Iowa. He plays with maturity that belies his years. And the 6-1 Gessel also has shown a deft passing ability, already making his teammates better. The point guard is averaging 9.6 points and 3.3 assists. Anthony Clemmons is another freshman point man who is turning heads in Iowa City, averaging 3.9 assists. See his full stats.

6. Sam Dekker, Wisconsin. The 6-7 Dekker is providing some offensive punch, averaging 9.8 points with a nice long-range shot. He also has done some nice work on the boards (3.7 pg). Once he fills out, Dekker will be a special player. See his full stats.

7. A.J. Hammons, Purdue. The late Al McGuire would call the 7-0, 250-pound Hammons an ?aircraft carrier.? No doubt, he?s a space-eater. But more vital: Hammons is developing into the team?s top offensive option. Purdue was expecting others to provide more offense, but Hammons has helped fill the bill and ranks second on the team in scoring with a 10-point average. He also averages 5.6 rebounds. He still has rudimentary offensive skills. But as he matures and hones his skills, Hammons could become a force. See his full stats.