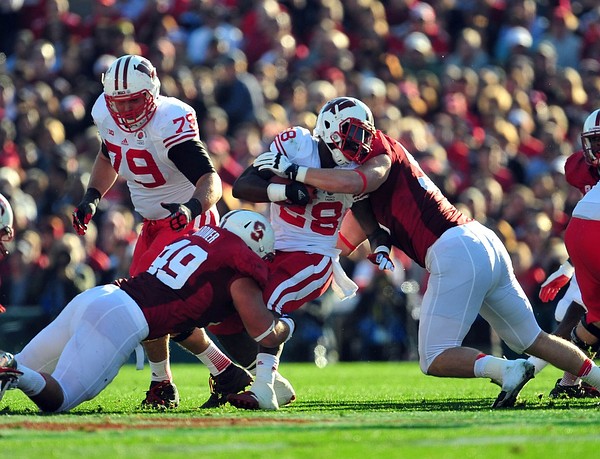 Stepfan Taylor rushed for 89 yards and an early touchdown, Kevin Hogan passed for 123 yards, and No. 8 Stanford's dominant defense shut out Wisconsin in the second half of a 20-14 victory in the 99th Rose Bowl on Tuesday night.

Usua Amanam made the decisive interception near midfield with 2:30 to play as the Pac-12 champion Cardinal (12-2) won their first Rose Bowl since 1972.

Stanford didn't score many style points, but the Big Ten champion Badgers (8-6) couldn't score many points at all while losing the Granddaddy of Them All in heartbreaking fashion for the third consecutive season

FIRST QUARTER: No. 7 Stanford got things going through the air, passing for 105 yards in the quarter, and the Cardinal lead 14-0 at the end of the first quarter. Stanford scored when Kelsey Young ran 16 yards to paydirt to put a bow on a seven-play, 80-yard drive. Stanford expanded its lead to 14-0 thanks to a five-play, 79-yard drive that ended when Stepfan Taylor pounded in a three-yard touchdown run. No. 25 Wisconsin is in a prime position for points on Stanford's eight-yard line to open the second quarter.

SECOND QUARTER: Wisconsin's Curt Phillips led the offense in the second quarter. He threw for 68 yards and one touchdown and ran for 38 yards, and the Badgers have closed the gap to 17-14. Wisconsin capped off a 49-yard drive when Montee Ball ran 11 yards to paydirt to make the score 14-7. Jared Abbrederis' punt return set the Badgers up to start the drive. Stanford added to its advantage when Jordan Williamson kicked a 47-yard field goal, polishing off a seven-play, 47-yard drive to give the Cardinal the lead, 17-7. An 85-yard drive that ended when Phillips and Jordan Fredrick combined for a four-yard touchdown helped Wisconsin narrow the deficit to 17-14. Wisconsin will have possession to start the second half.

THIRD QUARTER: The two teams combined for more punts than points in a slow third quarter and the margin is still three, as Stanford leads Wisconsin, 17-14. There were seven punts in the quarter as neither team could find a way to move the ball. The Cardinal have the ball at their own 18-yard line to begin the fourth quarter.

FOURTH QUARTER: Stanford's Stepfan Taylor led the offense in the fourth quarter. He ran for 39 yards and caught one pass for 12 yards, and the Cardinal kept Wisconsin at bay for a 20-14 victory. Stanford opened up the lead, 20-14, after Jordan Williamson drilled a 22-yard field goal to end an 11-play, 51-yard drive.