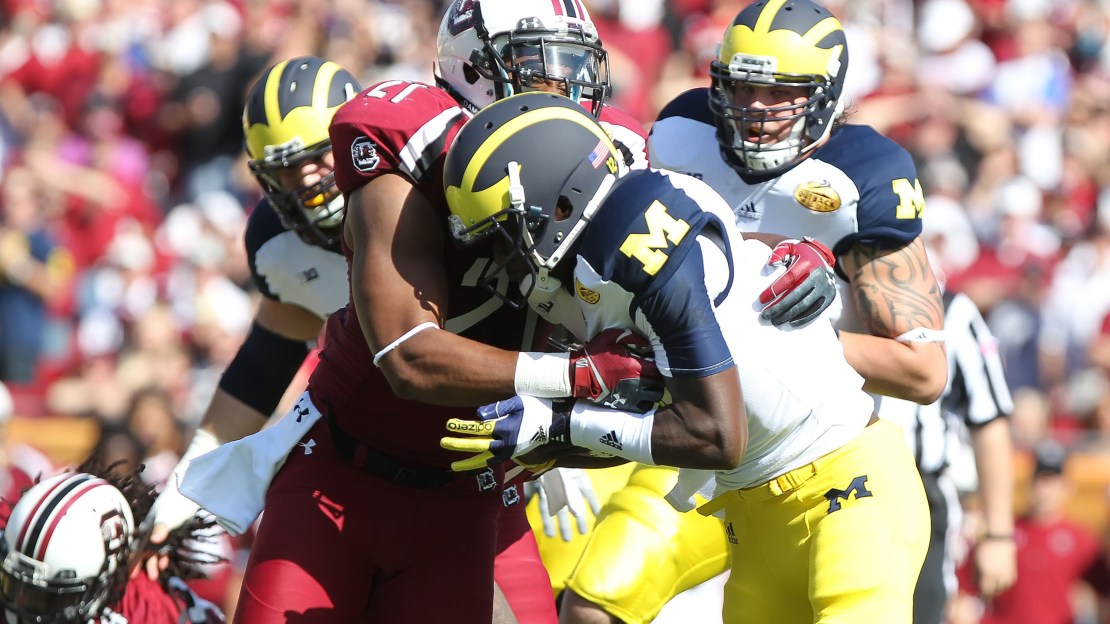 Dylan Thompson came off the bench to throw a 32-yard touchdown pass with 11 seconds remaining Tuesday, giving No. 11 South Carolina a 33-28 victory over No. 19 Michigan in the Outback Bowl. Thompson replaced Connor Shaw during the winning drive, covering the final 43 yards after the Gamecocks' starter began the march from his own 30. Devin Gardner's third TD pass of the game had given Michigan a 28-27 lead.

Shaw threw for 227 yards and two touchdowns after missing South Carolina's regular-season finale against Clemson with a left foot sprain. Gardner threw for 214 yards in his fifth start for Michigan (8-5) since Denard Robinson injured his right elbow in late October.

1. This was a painful loss for the Wolverines, who inexplicably allowed a game-winning 32-yard touchdown passes in the dying 11 seconds of the game after surging ahead. On that final, fateful drive, the Wolverines needed someone on the defense to make a play, to stop the ball, to get off the field, to hold the Gamecocks to a field-goal attempt. But, alas, no one made a play for a defense that yielded 426 yards (341 passing).

2. Denard Robinson played well in his swan song, running for a team-high 100 yards. He also threw his first pass since injuring his elbow in late October. And Robinson caught a pass for seven yards. It wasn?t enough to send the senior out a winner, but his legacy as one of the top players in school history is firmly entrenched. You will be missed, ?Shoelace.?

3. Devin Gardner had his moments at quarterback and looks primed to take that next step in 2013 after leading Michigan to 353 yards. He hit 18-of-35 passes for 214 yards with three touchdowns and an interception and looks to have a bright future after starting the final five games of the season.

FIRST QUARTER: No. 10 South Carolina held No. 22 Michigan to 12 yards on the ground during the first quarter, and the Gamecocks lead 14-3 at the end of the first quarter. South Carolina threw for 80 yards during the quarter. The Gamecocks got on the scoreboard first, rattling off a three-play, 67-yard drive that ended in a score when Connor Shaw threw a 56-yard touchdown pass to Damiere Byrd. The Wolverines made the score 7-3 after Brendan Gibbons kicked a 38-yard field goal to finish off a 51-yard drive. South Carolina made the score 14-3 when Ace Sanders returned a punt for a touchdown. Michigan has possession on the Gamecocks' 25-yard line to start the second quarter.

SECOND QUARTER: Michigan scored 10 points in the second quarter, including a Devin Gardner 5-yard touchdown pass to Drew Dileo, but it trails South Carolina, 21-13, at halftime. South Carolina went up 21-10 when Dylan Thompson and Ace Sanders hooked up for a four-yard touchdown on the last play of a four-play, 75-yard drive. The Wolverines closed the gap to 21-13 when Brendan Gibbons kicked a 40-yard field goal to cap an eight-yard drive. Michigan began the drive with good field position at South Carolina's 31-yard line after the Wolverines recovered a fumble. The Wolverines are set to receive to start the second half.

THIRD QUARTER: At one point Michigan trailed by 11 points, but the Wolverines have come back to take a 22-21 lead at the end of the third quarter. Michigan looked to be done with 12:15 to go in the third quarter, but the Wolverines have come all the way back to take the lead. Michigan has scored the last 12 points. The Wolverines made the score 21-16 after Matt Wile kicked a 52-yard field goal to finish off a 45-yard drive. Devin Gardner's 10-yard touchdown pass to Jeremy Gallon finished off a nine-play, 65-yard drive and gave Michigan the lead, 22-21. South Carolina will start the fourth quarter with the ball on its own 17-yard line.