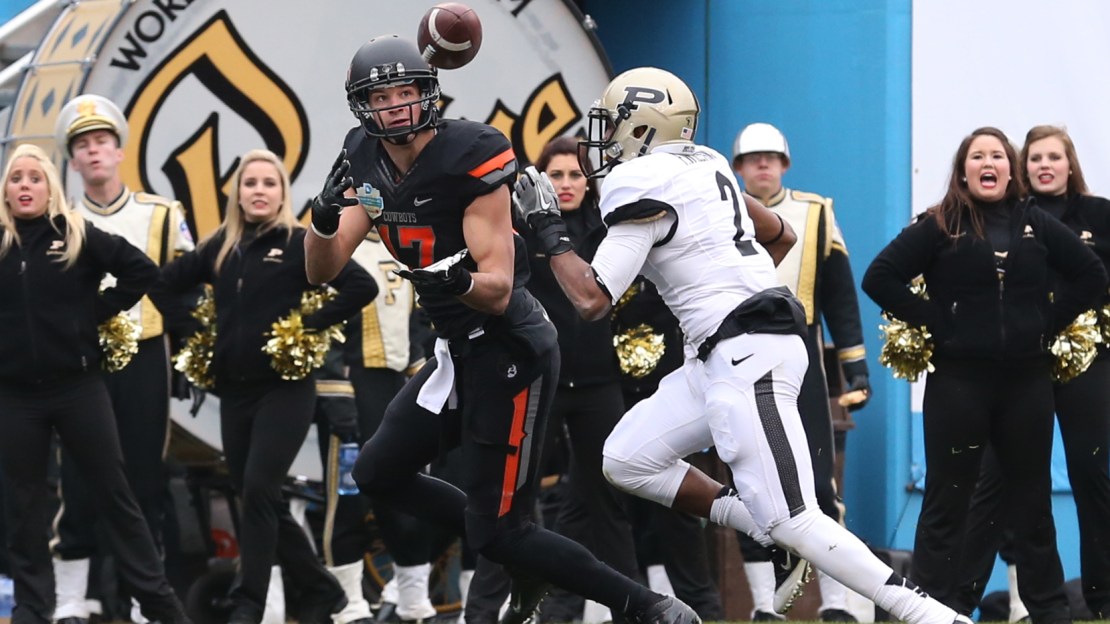 Clint Chelf threw three of Oklahoma State's five touchdown passes and the Cowboys shook off a disappointing Big 12 finish by dominating Purdue 58-14 in the Heart of Dallas Bowl on Tuesday. The Cowboys, a year removed from a Fiesta Bowl win that capped the best season in school history, forced five turnovers and had another short touchdown drive after a 64-yard punt return from Josh Stewart. Get the AP recap, video and Tom Dienhart?s Snap Reactions in this post.

The rout was Oklahoma State's biggest bowl win since coach Mike Gundy was the quarterback in a 62-14 rout of Wyoming in the 1988 Holiday Bowl.

1. Without a doubt, this was the worst bowl game in Purdue history. The Boilermakers never were in this game from the moment they got off the bus, not looking particularly dialed in to the goings-on-save for a few players like end Ryan Russell. And it showed in just about every facet of the game, as Purdue trailed 45-0 and 58-7 at two points today en route to committing five turnovers. The Darrell Hazell era can?t start soon enough in West Lafayette.

2. Robert Marve deserved to go out better after being the focal point of the Boilermakers? late-season charge that saw them win their last three games to become bowl eligible. And Marve did all of that playing on a bum left knee in his sixth season of eligibility. He hit 21-of-34 passes for 212 yards with two touchdowns and two interceptions and ran for 19 yards

3. The Purdue defense entered the season with so much hype-but was a flop all season. So, why should today have been any different vs. an Oklahoma State that was using its third-string quarterback? The Boilermakers allowed 524 yards, with 311 coming through the air. Bottom line: The Pokes did whatever they wanted, whenever they wanted. It really was that simple in a game most every pundit felt would be a colossal mismatch-and was. Oklahoma State apparently was upset about falling all the way to the Heart of Dallas Bowl after finishing third in the Big 12. The Cowboys are a very good team that deserved better. At least they didn?t pout about their bowl position and played hard-and very well, too.

FIRST QUARTER: Oklahoma State held Purdue to 21 yards through the air during the first quarter, and the Cowboys lead 14-0 at the end of the first quarter. Oklahoma State struck first when Clint Chelf and Charlie Moore combined for a four-yard touchdown, the final play of a four-play, 19-yard drive. Josh Stewart's punt return set the Cowboys up to start the drive. Oklahoma State expanded its lead to 14-0 thanks to a three-play, 26-yard drive that ended when Chelf found Blake Jackson open for a seven-yard touchdown pass. The Cowboys started in good field position when Shamiel Gary intercepted a Robert Marve pass. Oklahoma State has the ball at the Boilermakers' 22-yard line to begin the second quarter.

SECOND QUARTER: Oklahoma State appears to be on its way to a win, as it leads Purdue, 28-0, after the second quarter. The Cowboys got things going through the air in the quarter, passing for 84 yards. Oklahoma State added to its advantage when J.W. Walsh tossed a 16-yard touchdown to Jeremy Seaton, capping off a 10-play, 80-yard drive to give the Cowboys the lead, 21-0. Oklahoma State made its lead 28-0 when Jeremy Smith ran five yards to paydirt on the last play of a seven-play, 72-yard drive. Purdue is set to receive to start the second half.

THIRD QUARTER: Oklahoma State put up 17 points in the third, and it now leads Purdue, 45-7. The Cowboys executed a balanced offensive attack in the quarter, finishing with 75 yards passing and 65 yards rushing. The Cowboys made the score 35-0 when Oklahoma State recovered a fumble in the endzone, and they made it 38-0 when Quinn Sharp made a 20-yard field goal. Oklahoma State opened up the lead, 45-0, after Joseph Randle found Isaiah Anderson open for a 37-yard touchdown. Purdue got on the board when Robert Marve and Brandon Cottom combined for a 32-yard touchdown to make it 45-7. The Cowboys will start the fourth quarter with the ball on their own 40-yard line.

FOURTH QUARTER: Oklahoma State's high-powered offense resulted in 13 points in the fourth, and the Cowboys finished off Purdue 58-14. Oklahoma State racked up 97 passing yards and 86 rushing yards in the quarter. The Cowboys expanded their lead to 48-7 thanks to a 12-play, 69-yard drive that ended when Quinn Sharp drilled a 21-yard field goal. Oklahoma State had to settle for a field goal after failing to reach the endzone from the Boilermakers' four-yard line. The Cowboys opened up the lead, 55-7, after J.W. Walsh tossed a 37-yard touchdown to Blake Webb. Oklahoma State opened up the lead, 58-7, after marching down the field for a five-play, 13-yard drive that ended when Sharp kicked a 42-yard field goal.  The Boilermakers closed the gap to 58-14 when Marve and Tommie Thomas hooked up for a 16-yard touchdown to put a bow on a 61-yard drive.