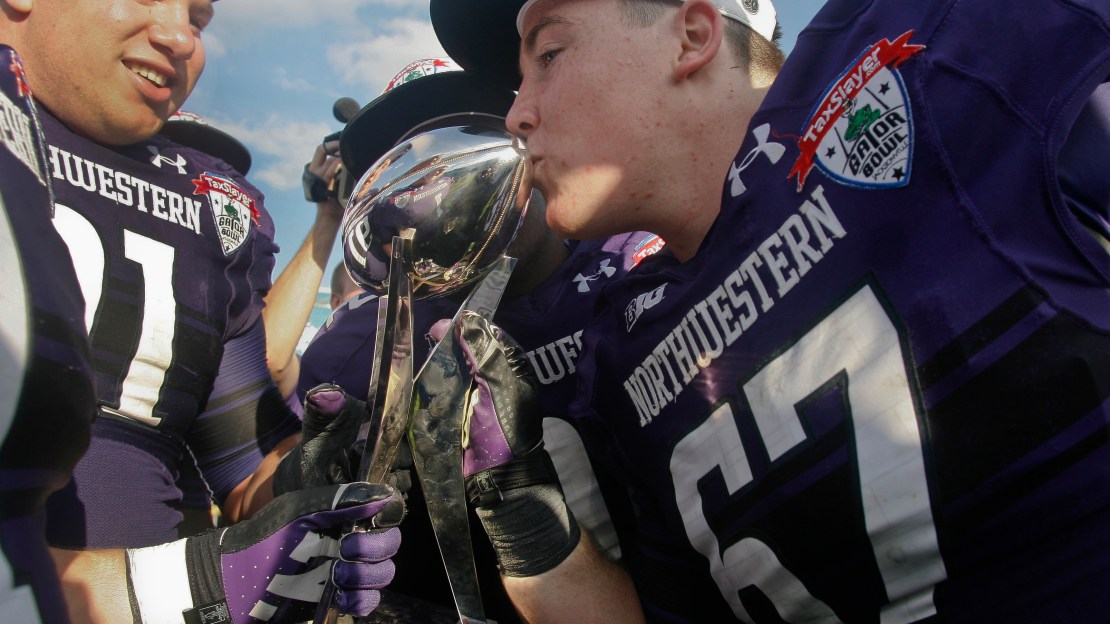 Behind huge interceptions early and late, No. 21 Northwestern beat Mississippi State 34-20 in the Gator Bowl on Tuesday and snapped the game's longest postseason losing streak. The Wildcats (10-3) won their first bowl game since 1949, snapping a nine-game funk that was tied for the longest in NCAA history. They also celebrated double-digit victories for the first time since the 1995 Rose Bowl season. Get the AP recap, video and Tom Dienhart's Snap Reactions in this post.

1. How about that Northwestern defense? The unit made some nice strides all season under coordinator Mike Hankwitz and may have played it best game of the season today in the Gator Bowl. The Wildcats allowed only 293 yards and generated four turnovers. And Mississippi State went just 1-of-11 on third downs with only 106 yards passing.

2. As they had most of the season, Northwestern excelled on the ground behind the running of Venric Mark and Kain Colter. The duo notched 162 yards on the ground for an offense that went 10-of-19 on third downs. The Wildcats heard for weeks about the bigger, tougher and better SEC. Well, it wasn't on this day in Jacksonville.

3. Mississippi State quarterback Tyler Russell was off his game–WAY off this game, tossing four interceptions with three coming in the first half. He hit just 12-of-28 passes for 106 yards. Russell's generosity played a big role in Northwestern ending a dubious nine-game bowl losing streak (which was tied for the longest in NCAA history) that dated to a win in the 1949 Rose Bowl. Things looked a bit dicey for NU when Mississippi State tied the game 13-13 early in the third quarter before outscoring the Bulldogs, 21-7, down the stretch. Just think of how great this season could have been had Northwestern not blow leads in all three of its losses (at Penn State, Nebraska, at Michigan).

Trevor Siemian scores on a keeper:

FIRST QUARTER: No. 20 Northwestern's secondary stifled the passing game, picking off two passes and allowing just 19 yards to Mississippi State in the first quarter, and the Wildcats lead 10-0 at the end of the first quarter. Northwestern made the score 7-0 when Quentin Williams intercepted a Tyler Russell pass and returned it for a touchdown. The Wildcats opened up the lead, 10-0, after marching down the field for a 15-play, 69-yard drive that ended when Jeff Budzien kicked a 34-yard field goal. Northwestern has the ball at the Bulldogs' 20-yard line to begin the second quarter.

SECOND QUARTER: Arceto Clark had a productive quarter for Mississippi State, catching an 18-yard touchdown pass, to pull the Bulldogs to within 13-10 at halftime. After jumping out to a 13-0 lead, Northwestern has given up 10 consecutive points. The Wildcats made it 13-0  when Jeff Budzien kicked a 37-yard field goal, the final play on a 10-play, 43-yard drive. Mississippi State responded with a 53-yard drive that ended when Devon Bell kicked a 27-yard field goal to get on the board. Mississippi State squandered an opportunity to score a touchdown, missing a chance to score from the Wildcats' two-yard line before settling for the field goal. The Bulldogs kept the ball on the ground during the drive, throwing only one pass. Northwestern will get the ball to start the second half.

THIRD QUARTER: Northwestern scored 14 points in the third quarter, and it now leads 27-13. The Wildcats, who have scored the game's last 14 points, executed a balanced offensive attack in the quarter, finishing with 100 yards passing and 68 yards rushing. Tyris Jones pounded in a three-yard touchdown run to break the 13-13 tie in favor of Northwestern. The play put the finishing touches on a six-play, 76-yard scoring drive. The Wildcats opened up the lead, 27-13, after marching down the field for an eight-play, 50-yard drive that ended when Siemian scrambled for a four-yard touchdown run. The Bulldogs will start the fourth quarter with possession at their own 30-yard line.

FOURTH QUARTER: Northwestern's defensive line went crazy in the fourth, penetrating Mississippi State's backfield so often that the Bulldogs finished with negative rushing yardage, at -7 yards, and the Wildcats finished off Mississippi State 34-20. The Bulldogs polished off a 75-yard drive when Tyler Russell found Malcolm Johnson open for a 14-yard touchdown pass to make the score 27-20. Northwestern added to its advantage when Venric Mark ran two yards to paydirt, the last of a three-play, five-yard drive to give the Wildcats the lead, 34-20.