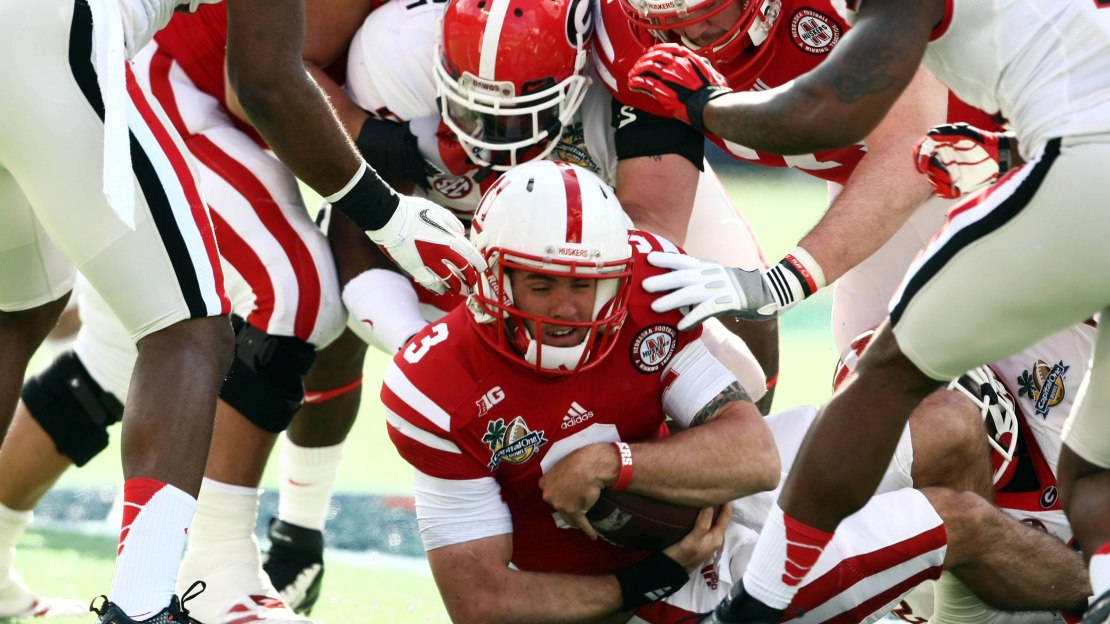 Aaron Murray threw five touchdown passes to set a Georgia bowl record, including two in the fourth quarter, as the sixth-ranked Bulldogs beat No. 23 Nebraska 45-31 in the Capital One Bowl on Tuesday. Murray shook off a pair of first-half interceptions, including one returned for a touchdown, and passed for 427 yards – also a Bulldogs' bowl record – against the nation's top-ranked passing defense. Get the AP recap, video and Tom Dienhart?s Snap Reactions in this post.

1. The Nebraska offense showed why it consistently ranked among the best in the Big Ten, notching 455 yards. Tim Beck?s attack ran for 251 yards and passed for 204. Quarterback Taylor Martinez was solid, hitting 16-of-27 passes for 204 yards with two touchdowns and two picks to go along with 58 yards rushing. And running back Rex Burkhead finished his career in style with 140 yards rushing.

2. The same demons that plagued the Cornhusker defense in losses to UCLA, Ohio State and Wisconsin reared its head in this game. The unit looked particularly bad when it allowed a short pass to go for an 87-yard touchdown in the fourth quarter to push Georgia?s lead to 45-31. In the end, the Huskers allowed a whopping 589 yards with 427 coming through the air along with five touchdown passes. So, in the last two games, the Huskers have allowed a combined 1,229 yards and 115 points. How do you continue to spin for this defense? Something is amiss. This is Year Five of the Bo Pelini era. Should this be happening?

3. Many felt Georgia would be a formidable opponent, as the Bulldogs were just an SEC title game loss to Alabama away from playing for the national championship. And, Georgia showed its power. After Nebraska took a 31-23 lead in the third quarter, the Bulldogs pulled away with three unanswered touchdowns to make a close game a romp as quickly as you can say 1-2-3.

FIRST QUARTER: No. 5 Georgia's offense scored 16 points thanks to four long plays and the Bulldogs lead 16-14 at the end of the first quarter. Georgia got things going through the air in the quarter, passing for 153 yards. The Bulldogs opened the scoring with a safety and made it 9-0 after Aaron Murray and Arthur Lynch hooked up for a 29-yard touchdown to end a 10-play, 80-yard drive. No. 18 Nebraska got on the board after Taylor Martinez threw a 14-yard touchdown pass to Jamal Turner to finish off a 75-yard drive. The Cornhuskers made the score 14-9 when Will Compton intercepted a Murray pass and returned it for a touchdown. Murray's 75-yard touchdown pass to Tavarres King finished off a one-play, 75-yard drive and gave Georgia the lead, 16-14.

SECOND QUARTER: Todd Gurley had a productive quarter for Georgia, running for 71 yards and a touchdown, but the Bulldogs have fallen behind 24-23. Nebraska's Rex Burkhead ran for 44 yards and caught a 16-yard touchdown pass in the quarter. Georgia opened up the lead, 23-14, after Gurley turned a handoff into a 24-yard touchdown to end a four-play, 38-yard drive. The Bulldogs started in good field position when Damian Swann intercepted Taylor Martinez's pass. Nebraska finished off a 46-yard drive when Brett Maher drilled a 39-yard field goal to make the score 23-17. Martinez's touchdown pass to Burkhead put the Cornhuskers on top 24-23, putting a bow on a five-play, 76-yard drive. The Cornhuskers will start the second half with the ball.

THIRD QUARTER: Nebraska's Rex Burkhead ran for 60 yards and one touchdown in the quarter, and the two teams are tied 31-31 at the end of the third. The Cornhuskers opened up the lead, 31-23, after marching down the field for a 13-play, 75-yard drive that ended when Burkhead pounded in a two-yard touchdown run. Georgia tied the score at 31 apiece after Aaron Murray tossed a 49-yard touchdown to Chris Conley to cap off a six-play, 79-yard drive. The Bulldogs connected on a two-point conversion when Rhett McGowan completed a two-yard pass. Burkhead topped 100 yards rushing for the game in the quarter, and has plenty of time to add to his 127 total yards on the ground. Georgia's Todd Gurley hit 100 yards rushing for the game in the quarter, part of his 118-yard rushing performance thus far.

FOURTH QUARTER: Georgia took the lead in the fourth quarter and survived the late stages of the game to take home a 45-31 win over Nebraska. With 14:52 to go, Aaron Murray and Keith Marshall combined for a 24-yard touchdown to give the Bulldogs the lead, 38-31. Georgia's secondary stifled the passing game, allowing just 20 yards through the air to the Cornhuskers in the quarter. The Bulldogs scored 22 unanswered points to close the game. Georgia scored on Murray's pass to break the 31-31 tie in favor of the Bulldogs. The play capped a six-play, 74-yard scoring drive. Georgia crossed midfield on Murray's 31-yard pass to Justin Scott-Wesley from the 30-yard line.