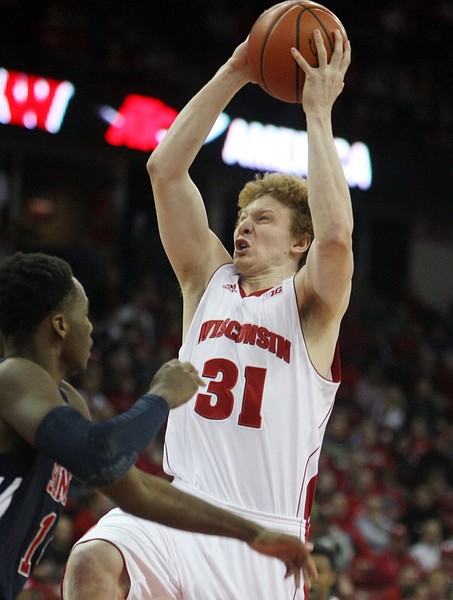 Frank Kaminsky scored 16 points and shot 6-of-7 from the field to lead five Wisconsin players in double figures as the Badgers topped Samford 87-51 on Saturday at the Kohl Center in Madison.

The Badgers hit 53 percent of their field goals (31-of-59). Wisconsin was hot from long range, hitting 12-of-21 threes for a 57 percent night from beyond the arc.

The Badgers started the game out strong with an 18-5 run, which allowed them to take a 13-point lead in the first. Kaminsky knocked down a field goal that capped off the run by the Badgers and helped Wisconsin lead 47-19 at the half.

Raijon Kelly had 16 points and went 4-of-5 from beyond the arc for Samford (3-11) in the game. Connor Miller shot 4-of-7 from the field and scored 12 points for the Bulldogs. Samford struggled from the floor, shooting 36 percent (18-of-50). More Samford scoring came from Tim Williams (11 points).

Wisconsin never trailed in the game. The Badgers' largest lead was 41, which came with 3:25 remaining. Wisconsin led 20-11 with 10:25 to go in the first half before it widened the margin to 30 points with a 27-6 run that ended with 20 seconds left in the first half. Traevon Jackson finished the run off with a free throw, which helped Wisconsin lead at halftime

HALFTIME: Wisconsin holds a 47-19 lead over Samford thanks to 58 percent first-half field goal shooting. The Bulldogs shot 22 percent from the field during the first half.

The Badgers led from the start and led by as many as 30 points. The game was tied before Samford went into a funk, going the next 3:50 without scoring, and allowing Wisconsin to take a 8-0 lead early in the game.

The Badgers made it rain from long range, shooting 60 percent (6-of-10) from three-point land. Eight Wisconsin players have scored.

Mike Bruesewitz is putting together a nice game so far for Wisconsin. The senior has 13 points. Raijon Kelly led the way for the Bulldogs in the first half, with eight points.