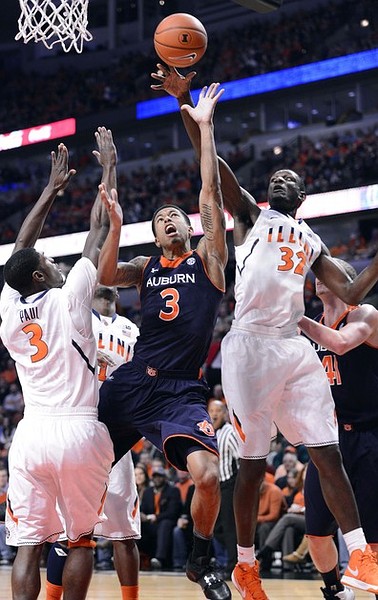 The Fighting Illini shot 27-of-40 from the free throw line. Illinois was able to secure 15 offensive boards.

The Fighting Illini also got a solid contribution from Brandon Paul (13 points).

Frankie Sullivan had 21 points, corralled three rebounds, and had four assists for Auburn in the game. Rob Chubb was 5-of-7 from the floor and chipped in 13 points for the Tigers. Auburn was hot from long range, hitting 11-of-23 threes for a 48 percent night from beyond the arc. The Tigers were able to secure 15 offensive boards. Allen Payne stuffed the statsheet for Auburn with a double-double. He contributed 10 points and grabbed 11 rebounds.

HALFTIME: Tracy Abrams scored 16 points for No. 15 Illinois as the Fighting Illini lead Auburn 47-42 at the half. Neither team has been able to take control of the game thus far. The Fighting Illini and the Tigers traded the lead eight times in the first half.

An aggressive offense and the ability to get to the charity stripe allowed Illinois to take a halftime lead. The Fighting Illini made 14 of 14 free throws.

After already giving up nine offensive rebounds to Auburn, Illinois will have to keep the Tigers off the boards in the second half. Rob Chubb already has three fouls and he's been the best player on the court for Auburn with eight points, five rebounds as he shot 4-of-5 from the field. Nine Auburn players scored in the first half.