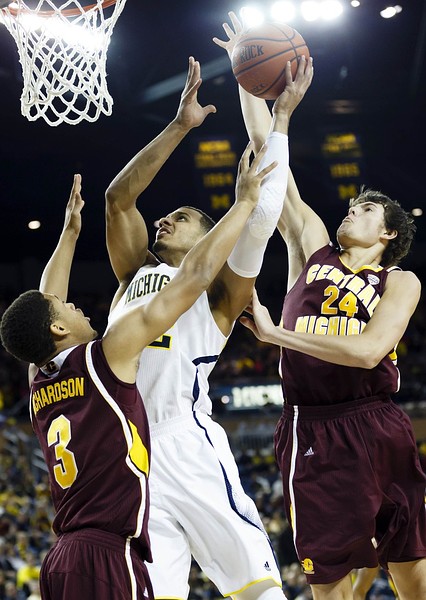 Trey Burke scored 22 points to lift No. 2 Michigan to an 88-73 win over Central Michigan on Saturday. Burke contributed 11 assists, shot 9-of-12 from the field, and shot 4-of-7 from long range. Nik Stauskas contributed 19 points, corralled seven rebounds, knocked down 6-of-10 shot attempts, and drilled 5-of-8 three-pointers.

Tim Hardaway Jr. did not play tonight against Central Michigan and sat out with a right ankle injury. That snaps Hardaway's streak of 81 straight starts at Michigan.

FINAL:  Burke and Nik Stauskas both had good games for Michigan (13-0). Burke contributed 11 assists, shot 9-of-12 from the field, and shot 4-of-7 from long range. Stauskas contributed 19 points, corralled seven rebounds, knocked down 6-of-10 shot attempts, and drilled 5-of-8 three-pointers.

The Wolverines also got a double-digit performance from Glenn Robinson III (20 points).

Derrick Richardson Jr. scored 11 points, hauled in six rebounds, and went 5-of-5 from the field for Central Michigan (7-6) in a losing effort. The Chippewas hit 47 percent of their field goals (28-of-59). Central Michigan was tough on the offensive boards, grabbing 14. The Chippewas also got double-digit games from Kyle Randall (10 points), Austin Keel (11 points), and Olivier Mbaigoto (14 points).

Central Michigan pounded the boards hard in defeat as it grabbed 41 to 30 for Michigan. The Wolverines never trailed in the game. Michigan's largest lead was 25, which came with 16:11 in the game.

HALFTIME: Trey Burke scored 17 points and dished out three assists as No. 2 Michigan leads Central Michigan 46-29 at the half.Burke and Caris LeVert are leading the way for the Wolverines. Burke shot 7-of-9 from the field and hit 3-of-5 three-point tries. LeVert scored nine points, had four assists, and shot 4-of-6 from the field.

Michigan never trailed in the first half and led by as many as 19 points.

Michigan has been effective inside, making 16-of-21 two-point field goals, but the Wolverines have struggled on the perimeter, shooting 4-for-14 from three-point range.

After already giving up eight offensive rebounds to the Chippewas, Michigan will have to keep Central Michigan off the boards in the second half. The Chippewas demonstrated their offensive efficiency by racking up seven assists on 11 baskets. Central Michigan got points from eight different players.

Spencer Krannitz led the way for Central Michigan in the first half, with six points and seven rebounds.