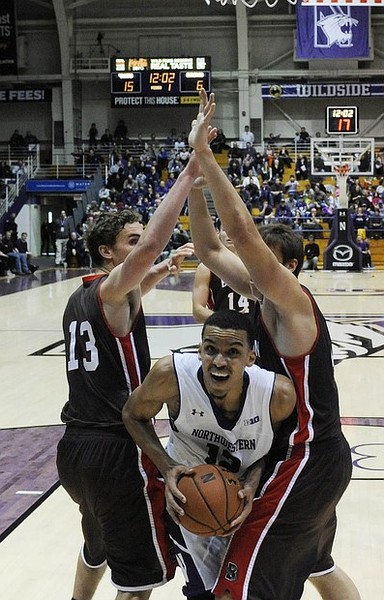 There was a trio of Big Ten men's basketball games Sunday, including Penn State topping New Hampshire, 72-45, and Northwestern taking down Brown, 63-42. Get scores, stats, recaps and select highlights from all three games in this post.

Use these links to catch up on all the action:

FINAL: Penn State's defense shut down New Hampshire, as the Nittany Lions defeated the Wildcats 72-45 on Sunday at the Bryce Jordan Center in University Park. Penn State (7-4) held New Hampshire (4-7) to 23 percent shooting from the field. Jermaine Marshall had a big performance for Penn State, with 15 points and 3-of-5 shooting from beyond the arc. Other Penn State scorers in double figures included Sasa Borovnjak (11 points) and Brandon Taylor and D.J. Newbill, who each scored 10.

HALFTIME:  There were no free points for New Hampshire, as Penn State clamped down defensively to hold the Wildcats to 18 percent shooting in the first half and has a 39-14 lead going into the break. The Nittany Lions were leading 12-6 when they used a 12-0 spurt to widen their advantage to an 18-point margin. Penn State's Brandon Taylor had a big first half, with 10 points.

FINAL: Ray Gallegos scored 22 points, but it wasn't enough as UTEP dropped Nebraska, 68-52, on Sunday at Don Haskins Center in El Paso in the Sun Bowl Invitational. Konner Tucker sparked the Miners (6-5), scoring 17 points and shooting 5-of-7 from long range. Jacques Streeter was 6-of-9 from the floor and chipped in 17 points for the Miners. UTEP hit 47 percent of its field goals (25-of-53), including 50 percent from distance (8-of-16). Nebraska shot just 37 percent from the field (19-of-51). More Nebraska scoring came from Brandon Ubel (11 points).