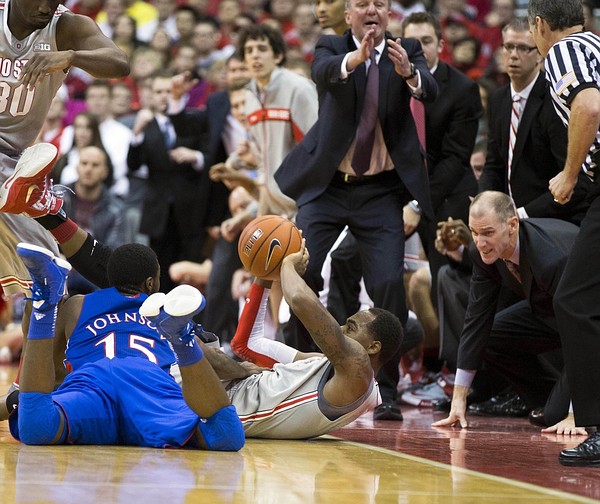 Redshirt freshman Ben McLemore scored 22 points and No. 9 Kansas proved it was more than just a bully at home by beating seventh-ranked Ohio State 74-66 on Saturday. It was the third victory for the Jayhawks (10-1) in little more than a year over the Buckeyes (9-2). Kansas won a 64-62 thriller in last year's NCAA semifinals.

The Jayhawks, who had yet to play a true road game, held Ohio State without a field goal for more than 10 minutes of the second half. The Buckeyes, who were led by Deshaun Thomas' 16 points, hit just 9 of 36 shots from the field in the final 20 minutes.

FINAL: Ben McLemore scored 22 points and grabbed six rebounds to lead No. 8 Kansas to a 74-66 win over No. 7 Ohio State on Saturday at Value City Arena in Columbus. Travis Releford was 4-of-5 from the floor and chipped in 11 points for Kansas (10-1). Jeff Withey had a double-double for Kansas, with 14 points and 10 rebounds. Shannon Scott led the Buckeyes (9-2) with 15 points and added six rebounds and five assists.

HALFTIME: Ben McLemore and Jeff Withey combined for a successful first half as No. 8 Kansas leads No. 7 Ohio State, 37-35, at halftime McLemore scored 13 points and hit 3-of-5 three-point tries, while Withey scored six points and grabbed seven rebounds. The Buckeyes trailed 23-17 when they broke out for a 14-0 run to overtake the Jayhawks and seize an eight-point lead. But Kansas answered back. Ohio State shot 6-of-13 from beyond the arc in the first half (46 percent). Shannon Scott led the way for the Buckeyes, scoring 10 points and adding three rebounds and three assists.