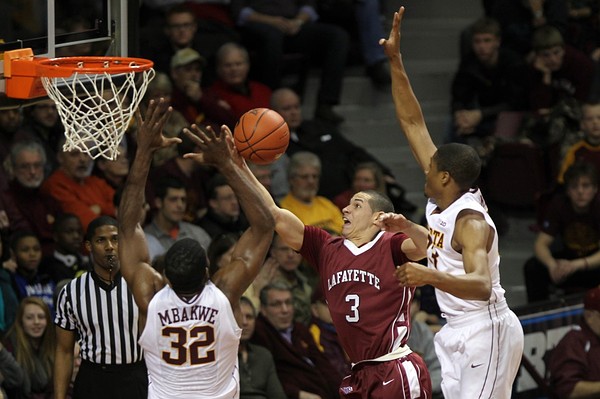 Starting guard Joe Coleman scored 12 points, and No. 13/16 Minnesota got 42 points from its reserves in a 75-50 rout of Lafayette on Saturday night. Otto Osenieks added 10 points for the Gophers (12-1), who have won eight straight.

Minnesota led by 15 at halftime before stretching its lead soon after the break. Rodney Williams scored six points, and Coleman added four, including a steal and dunk, as the Gophers went ahead by 20 and cruised the rest of the way.

Osenieks scored while being knocked to the floor and made the ensuing free throw to cap a 16-4 run that put Minnesota up 67-37 with 7:31 to play. Wally Ellenson scored on a reverse dunk two minutes later.

Andre Ingram finally put it down for Gophers:

Joe Coleman throws down in transition:

Oto Osenieks dunks on the break:

HALFTIME: No. 16 Minnesota went on a 9-2 run to close the first half on a high note and leads Lafayette 37-22. The Golden Gophers controlled the boards, outrebounding the Leopards 21-10 in the first half. Minnesota applied the pressure in the first half, earning second-chance opportunities with 12 offensive rebounds, to just four for Lafayette. The Golden Gophers registered 10 assists on 14 field goals. Joe Coleman is putting together a nice game so far for Minnesota, with eight points and three rebounds.