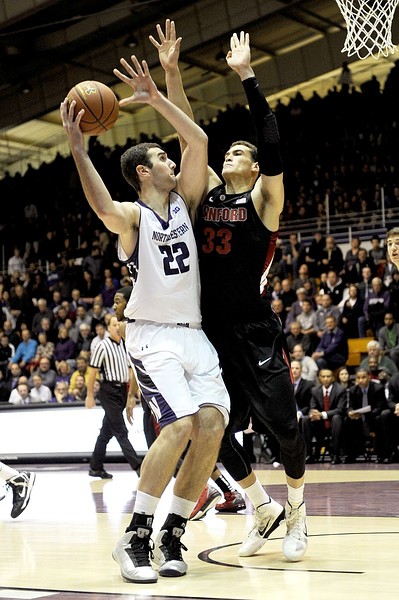 Josh Huestis tied a career-high with 18 points and grabbed 12 rebounds and Stanford came away with a wild 70-68 victory over Northwestern (8-4) on Friday. The Cardinal (8-4) built an 18-point lead in the first half.  Later, Northwestern's Tre Demps nailed a 3-pointer and scored in the lane to tie it at 61 with 6:34 remaining. He hit another 3 with 1:50 left to tie it at 67, but Stanford held on.

FINAL: Stanford took the lead with 1:31 to go on a field goal by Aaron Bright and hung on for a 70-68 win over Northwestern on Friday at Welsh-Ryan Arena in Evanston. Josh Huestis sparked Stanford (8-4), as he contributed 18 points in the victory. John Gage shot 3-of-5 from the field and scored 12 points for the Cardinal. Stanford was on fire from beyond the arc during the game, shooting 46 percent (11-of-24). The Cardinal also got a double-digit game from Robbie Lemons (12 points). Reggie Hearn scored 18 points and knocked down 6-of-10 shot attempts for Northwestern (8-4) but twisted his ankle in the second half. More Northwestern scoring came from Alex Marcotullio (10 points), Tre Demps (12 points), and Alex Olah (16 points). Stanford was more effective from the floor, shooting 45 percent (25-of-56) to the Wildcats' 42 percent (24-of-57).

HALFTIME: Stanford leads 35-31 over Northwestern at the half thanks to a nice start from Josh Huestis, who has 12 points on 5-8 shooting.The situation might've been even worse for the Wildcats, as the Cardinal led by as many as 18 points with 7:05 to go in the first half. Trailing 13-12, Northwestern went cold, going 4:45 without a point while Stanford went on a 15-0 run to open up a 16-point lead. Most of the Wildcats' offense has come from Reggie Hearn and Alex Olah, who have scored 24 of the team's 31 total points. Hearn has scored 14 and Olah has added 10. The Cardinal hit seven threes in the first half, shooting 47 percent from deep.