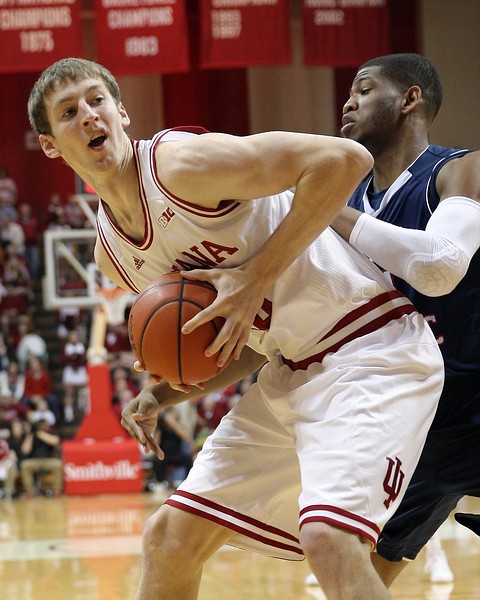 Cody Zeller had 24 points and six rebounds, leading four Indiana players into double figures and the sixth-ranked Hoosiers routed Florida Atlantic 88-52. The Hoosiers (11-1) have won 29 straight home games against nonconference foes. Since losing to Butler on Saturday, the Hoosiers have shot a combined 64 of 106 from the field (60.4 percent).

FINAL: Cody Zeller scored 24 points and grabbed six rebounds to lift No. 6 Indiana (11-1) to an 88-52 win over Florida Atlantic on Friday at Assembly Hall in Bloomington. Zeller knocked down 6-of-9 shot attempts. Victor Oladipo had 16 points, hauled in nine rebounds, and shot 6-of-8 from the field. The Hoosiers shot 52 percent from the field (28-of-54). Indiana went 26-of-27 from the charity stripe as a team (96 percent). The Hoosiers also got double-digit games from Jordan Hulls (10 points) and Christian Watford (17 points). Greg Gantt contributed 25 points for Florida Atlantic (5-7) in the loss. The Owls struggled from the floor, shooting 34 percent (19-of-56). Indiana won the rebounding battle en route to victory, pulling down 40 boards to 31 for Florida Atlantic. The Hoosiers were winning 33-17 with 6:02 to go in the first half before they went on a 22-5 run to extend their lead to 33 points late in the first. Oladipo finished the run off with a field goal, which helped Indiana lead 55-25 at halftime.

HALFTIME: Cody Zeller scored 15 points for No. 6 Indiana in the first half to carry the Hoosiers to a 55-25 lead over Florida Atlantic. Zeller and Victor Oladipo are leading the way for Indiana. Zeller grabbed four rebounds and shot 5-of-6 from the field.Oladipo scored 12 points, grabbed five rebounds, and shot 5-of-6 from the field. The Owls went into a funk with the score 11-8, going 3:55 without a point while the Hoosiers went on a 13-0 run to open up a 16-point lead. Indiana had five offensive rebounds in the first half, leading to second-chance opportunities. Indiana got points from seven different players. Greg Gantt and Andre Mattison have shouldered the offensive burden for Florida Atlantic, scoring 19 of the team's 25 total points. Gantt has scored 14 and Mattison has added five.