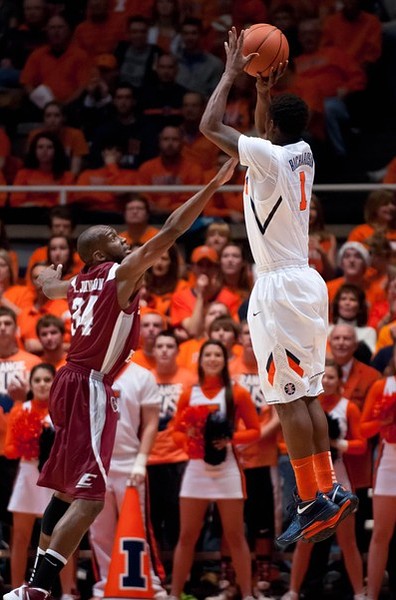 With the latter half of this quiet week bringing nothing but blowouts, let?s instead focus on one of the more surprising developments of the season thus far–the play of the Illinois Fighting Illini. The John Groce era has gotten off to a remarkable start in Champaign–the Illini are 12-0 and ranked 10th in the AP poll. But, college basketball observers can be forgiven for asking: haven?t we seen this film before? After all, this is largely the same group of guys that got off to a surprising start last season:

The 2011-12 Illini would push their record to 15-3 with a win over Ohio State (you remember, the Brandon Paul game), and they climbed all the way to 22nd in the AP poll. What followed was a complete collapse–Illinois went 2-12 the rest of the way, and what had looked like a surefire at-large team ended up with no postseason appearance at all. Somehow, the Illini had covered the full range of possibilities we had covered in our 2011-12 season preview (hey, the Brandon Paul/Kemba Walker comparison doesn't seem quite so insane now!). Could such a nosedive happen again?

Anything?s possible, but this Illini vintage is on much more solid ground. For one thing, last season?s team never looked all that great by KenPom rank–it peaked in the upper 30s in early December and never got higher than that, even after the Ohio State upset. This season?s team, by contrast, has spent time in the KenPom top 25 and currently sits 31st. It?s not hard to argue that this is simply a better team at this stage of the season.

But, below the surface, what has made this team better? Here?s a look at the average game stats for the Illini after 12 games:

The defense is largely the same. The improvements have come on the offensive end–quite simply, this year?s Illini are shooting a lot better. Is that a fluke, or is it a function of John Groce?s approach and/or individual skill improvement? A deeper dive into play-by-play data (courtesy of Hoop-Math.com) can provide some insight.

It?s very important to keep in mind that the 2011-12 numbers are for the entire season, so they were posted against a much tougher schedule than the 2012-13 numbers. We see that Illinois is getting basically the same number of shots at the rim (layups, dunks, tip-ins) as it got last season. The big change has come on jumpshots–the Illini are taking fewer two-point jumpers and more three-point jumpers. This is an obviously superior strategy. Two-point jumpers don?t go in at a much higher rate than three-point jumpers, and they don?t offer much in the way of other advantages either (free throws earned and offensive rebounding aren?t appreciably better for long twos vs. threes). Since the two shots are basically the same except for how many points they are worth, it?s clearly smarter to take more threes instead of long twos.

Of course, taking a bunch of threes won?t help you if you aren?t making them, and this is where Illinois has really made strides. Here?s Illinois? shooting percentage on each type of shot:

The Illini are shooting about as well on both kinds of twos as they did a season ago, but they?ve made huge strides in three-point accuracy. And it?s been an across-the-board improvement:

Anytime a team shoots so much better with the same cast of characters, there is reason to be skeptical, and I do think Illinois has some reversion-to-the-mean in store. In fact, some has already happened, as the Illini have shot 26 percent on threes in their past two games, resulting in mediocre outputs against bad defenses. But, with a third of the season already in the books, we have to admit that at least some of this improvement is for real.

This Saturday?s big matchup with Missouri seems to play to the strengths of the Illinois offense. The Tigers don?t force turnovers (293rd nationally) and don?t run opponents off the three-point line (239th nationally in 3PA/FGA), so the Illini should find themselves with plenty of good looks from deep. Missouri is very good at defending twos and not fouling, but those aren't really part of Illinois? game anyway. As will be the case all season, Illinois will be tough to beat when they are making threes, and an accurate night in St. Louis could keep the Illini unblemished.

Illinois isn?t the only team with a big game on Saturday. Ohio State hosts Kansas and its stifling interior defense. Michigan State hosts Texas in a game that figures to be quite ugly–the Longhorns can really defend, but their offense has been dreadful. Expect the first team to 60 to get the win.

Tonight, Northwestern has a chance to make a statement without Drew Crawford as the Wildcats host Stanford. The Cardinal play solid defense, so a good offensive output from Northwestern would be an excellent sign.

It?s hard to believe, but these are the last meaningful nonconference games of the season, as we?re a mere 10 days away from conference play. Happy holidays, hoops fans.