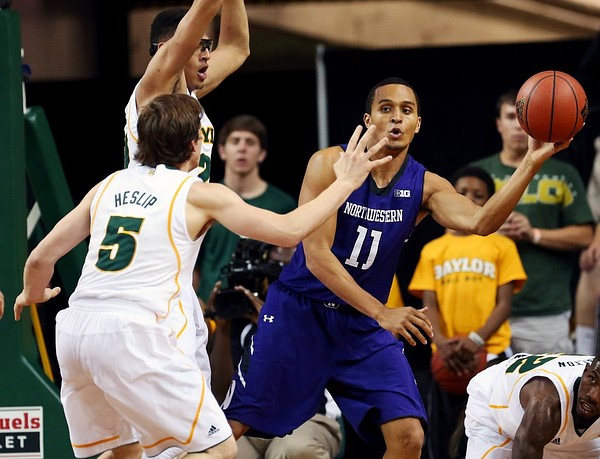 Reggie Hearn knows some great basketball players have matriculated through Northwestern. Guys like Evan Eschmeyer, Billy McKinney, Shon Morris, Juice Thompson and John Shurna, among others. And none of them delivered an NCAA tourney bid. There have been six trips to the NIT, but Hearn and his teammates want more. They want to dance in March.

The 6-4, 210-pound senior guard from Fort Wayne, Ind., has helped the Wildcats move to an 8-3 start following a 74-68 win over Texas State. Next up is a visit from Stanford on Friday. It will be Northwestern?s first big test since losing senior forward Drew Crawford to a season-ending right shoulder injury.

How will the Wildcats respond without their most polished player and inspirational leader? Hearn knows he must step up. And so far, he has delivered, pacing the team in scoring with a 14.2-point average to go along with 5.4 rebounds and 2.0 assists per game. Not bad for a former walk-on who averaged just 7.4 points last season, his first as a starter.

I caught up with Hearn-who went to the same high school (Snider) as NFL Hall of Famer Rod Woodson–to get his thoughts on the Northwestern season thus far-a season that still teems with the potential of the school?s first NCAA bid.

Q: What is your role on the team this season-on and off the court?
A: I need to be a senior leader. Sometimes, I?m not that vocal. I am more of a lead-by-example guy. We have a lot of young players trying to learn the offense and the defense. They are just trying to get a feeling for how things go in this program. I need to be a steady leader who knows what is going on and help direct guys when they don?t know what to do.

Q: On the floor?
A: I need to be someone who does it all. With Drew going down, I need to be more of a force when it comes to scoring. I also am second on the team in rebounds and need to keep that up. That?s an area we have suffered in the last couple of years. I know I can contribute there. And on defense, I need to be one of the better perimeter defenders that we have. I am just trying to do my best in all different areas.

Q: How has the season gone so far?
A: I think even with Drew going down, and the fact that we have finals, it was good to get that recent win over Texas State. It was a much-needed win. We have been working a lot in practice trying to get new guys acclimated into new roles with Drew out. I think we are on the right track. Stanford will be a good test for us. I believe they are defending NIT champs, so it will be a good test for us.

Q: What was your first reaction when you heard about Crawford?s injury?
A: It was a blow. It blindsided me. I didn?t expect it to be coming. Drew is a huge, huge part of this program. With him down, we need to find other guys who can step up. We need to get the young guys going. My first reaction was: This is gonna be tough on us. But I think we have some resilient guys who can step up.

Q: What would it mean to get the program to the NCAA tournament for the first time?
A: That would mean everything. Coming into this program four years ago as a walk-on, I knew this program never had been there before. But I also saw a program on the rise. Coach Carmody has done a great job with this program. Even though I didn?t watch Northwestern games a lot (growing up), I had seen Juice (Thompson) play, Kevin Coble and I knew the program was on the rise. And I was thinking how awesome it would be to come in here and be a part of a program that made the NCAA tourney for the first time. As a senior, this is my last shot. And I?m hoping and praying that we get there. That would mean everything to get this program to that level.

Q: Did you consider walking on at Purdue or Indiana coming out of high school?
A: I didn?t really look at those two schools. Even growing up, I didn?t really cheer for them. If I did have to cheer for a team, it was Purdue or Indiana. But, to be honest, academics were a slightly bigger factor as far as my choice of college. So, Purdue and Indiana weren?t on my final list of schools.