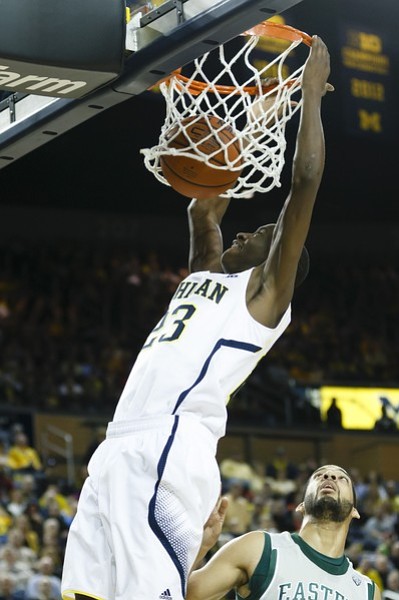 Tim Hardaway Jr. had 17 points and a career-high seven assists to help No. 2 Michigan rout Eastern Michigan 93-54 Thursday night. The Wolverines (12-0) are off to their best start since winning the first 16 games of the 1985-86 season. Michigan trailed 6-2 in the opening minutes, then took control with a 20-0 run. The Wolverines led 40-24 at halftime and enjoyed an even bigger cushion for much of the second half.

FINAL: Tim Hardaway Jr. scored 17 points and grabbed five rebounds and Nik Stauskas added 16 points and five boards as they teamed up to lead No. 2 Michigan to a 93-54 victory over Eastern Michigan on Thursday at Crisler Center in Ann Arbor. Michigan (12-0) shot 49 percent from the field (35-of-71). Video, photos and more details in this post. The Wolverines shot 12-of-24 from three-point range during the game, good for 50 percent. Michigan grabbed 17 offensive rebounds. Mitch McGary had a double-double for the Wolverines. He had 10 points, grabbed 10 rebounds, and made 5-of-9 shots from the floor. Antoine Chandler had a quality shooting game, nailing 3-of-5 shots from the field and scoring eight points. Eastern Michigan (6-4) had trouble finding its touch, shooting just 36 percent (22-of-61) from the field. The Eagles got double-figure scoring from Glenn Bryant (10 points) and Daylen Harrison (13 points). Michigan outrebounded Eastern Michigan 47-32. The Wolverines had the free throw shooting advantage, converting on 92 percent (11-of-12) attempts, to just 50 percent (3-of-6) for the Eagles.