Big Ten Geeks: Should every team play in tourney? 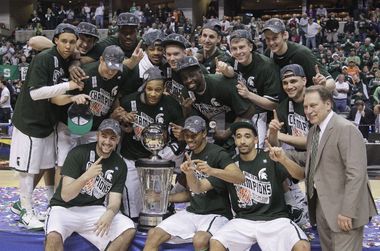 We've already argued for and against divisions in Big Ten basketball. Today, we discuss whether every member of a 14-team Big Ten should be allowed to play in the Big Ten tournament. Tournaments are a lot of fun. There?s no atmosphere that?s better than a split crowd at a neutral site. And in the Big Ten Tournament, that happens numerous times over a four-day stretch.

Take 2006 for example. Syracuse is probably out of the bracket at the outset of the Big East Tournament. The Orange had gone 19-11 (7-9 in the Big East) during the regular season, which included some bad losses (including a 39-point loss to DePaul. DePaul.). But the Orange went on a run to win the Big East Tournament by an exceedingly small margin (winning two games by a point, an overtime game by two points, and the championship game by four points). By doing so, the Orange went from outside the bubble to a 5-seed.

Something similar happened with UConn in 2011. Although they won the National Championship, the Huskies were just 9-9 in conference play. Normally, that merits something like an 8-seed. But they won the Big East Tournament by winning five games (three of them in overtime or by one possession), and vaulted up to a 3-seed. Does UConn win the title if Syracuse scores one more point in regulation? Probably not.

This isn?t to say that a smaller Big Ten Tournament will eliminate overseeding problems. But the longer the Tournament is, the more risk of increasing that danger. Winning five games in five days sounds more impressive than winning four, even if one of those wins comes against a DePaul team that went 1-17 in conference play.

And that highlights the other problem. With the Big Ten getting bigger, there are bound to be teams that get left in the dust every year. Do we really need an apathetic Wednesday, where the unlikeliest of underdogs only serve as an appetizer for the real competitors?

Also, making the conference tournament bigger means it?s longer. Now it starts on Wednesday, instead of Thursday. It?s going to be harder for people to take that extra day off work, and we?re adding expenses like an extra night in a hotel room as well. Of course not everyone has to plan on showing up that first day, but that just means the arena is that much emptier. The last thing I want is for the Big Ten Tournament to resemble the empty arenas of early season tournaments. And I think that?s what you?re likely to get when Day One includes #13/#12 and #14/#11 matchups.

Including every single team in the Big Ten Tournament is only going to present logistical difficulties for the sake of watching the worst teams in the conference end their seasons on a neutral floor. That hardly seems like a prize worth the trouble.

For me, one of the charms of college basketball?s postseason is the way conference tournaments serve as feeders to the Big Dance. It?s like we start the postseason with a massive, 300+ team tournament. With a few exceptions (the Ivy League and a few conferences where bottom dwellers don?t make the tournament), every member of a D1 conference gets a new lease on life-win and your season continues.

I get the logistical arguments, and I know that games involving teams from the bottom of the B1G are unlikely to be all that interesting or watchable, but there?s a part of me that loves the glimmer of hope that fanbases can maintain deep into an otherwise dismal campaign. ?Sure, we just got smoked by a mediocre conference rival, but you never know what can happen in the tournament!? In most cases, the result is a predictable one-and-done exit, but the improbable runs of March have a certain magic that we shouldn't discourage.

I have no doubt that Illinois fans have fond memories of the excitement they felt during the 1999 and 2008 Big Ten tournaments. As #11 and #10 seeds, respectively, those Illini squads each reached the tournament final, nearly completing the magical run about which all regular season disappointments dream. If the bottom two teams had instead been exempted from the tournament, those Illinois seasons would have ended quietly in meaningless games instead of on the national stage. I think that glimmer of hope for every fan base (and the heightened engagement that comes with it) is worth the logistical trade-off. Bring on the 14-team tournament.

Editor's note: What is your preference on a Big Ten Basketball Tournament format? Should every Big Ten team qualify or should there be a limit? We ask that question in our ongoing Big Ten Conference expansion realignment survey below. All survey results will be sent to the Big Ten office.