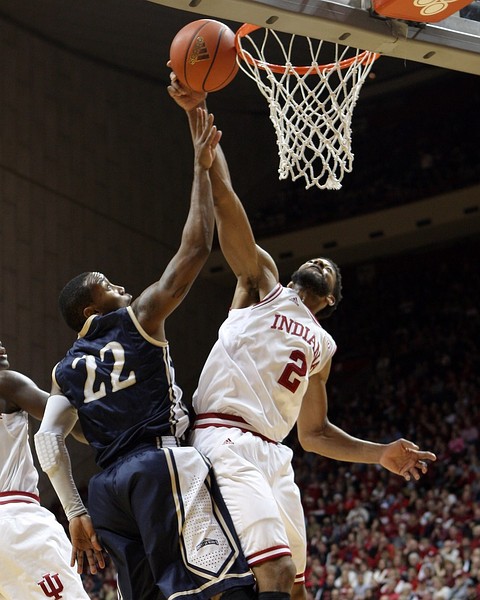 Cody Zeller finished with 16 points and six rebounds, and Christian Watford added 15 points and eight rebounds, leading No. 6 Indiana to a 93-54 rout of Mount St. Mary's on Wednesday night. The Hoosiers (10-1) looked like a team ready to make amends four days after its first loss of the season.

Five players scored in double figures for Indiana, which had a huge rebounding edge (41-18) over the Mountaineers. The Hoosiers shot 70.6 percent – the fourth-best mark in school history.

Mount St. Mary's was led by Rashad Whack with 17 points and Josh Castellanos and Sam Prescott added 10 each.

Cody Zeller throws it down :

Will Sheehey throws it down on the break:

FINAL: Cody Zeller scored 16 points and grabbed six rebounds and Christian Watford added 15 points and eight boards to lead No. 6 Indiana to a 93-54 victory over Mount St. Mary's on Wednesday at Assembly Hall in Bloomington. Indiana (10-1) hit 71 percent of its field goals (36-of-51) and still grabbed 11 offensive rebounds. Remy Abell was 5-of-5 from the floor and chipped in 12 points for Indiana, and the Hoosiers also got double-digit contributions from Will Sheehey (16 points) and Victor Oladipo (14).

HALFTIME: No. 6 Indiana took full advantage of the stellar combination of Christian Watford and Will Sheehey, ending the first half against Mount St. Mary's up 46-29. Watford scored nine points and grabbed four rebounds, while Sheehey scored 10 points and shot 4-of-4 from the field. The Hoosiers, who never trailed in the opening 20 minutes, led 30-26 before going on a 16-3 run to close the half. Indiana played team basketball in the first half, to the tune of 14 assists on 18 field goals. Cody Zeller added eight points and Victor Oladipo and Remy Abell chipped in seven apiece.