Mailbag: How about no divisions for football? 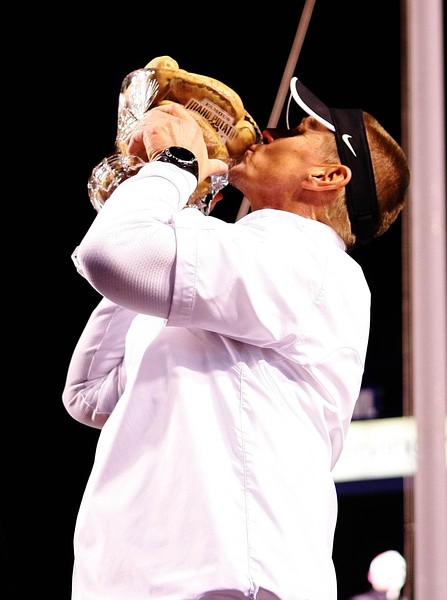 It?s the busy holiday season, but that hasn?t stopped your flow of questions! Thanks! There is a lot going on in the Big Ten as we come to the end of 2012, with the bowl season starting, basketball picking up steam, Wisconsin hiring a coach and talk of Big Ten divisional realignment percolating. I look at all of that in my mail bag.

Congrats to Badger fans on the pending hiring of Utah State?s Gary Andersen. It is a great hire. Andersen is a great coach, getting the best out of his teams and talent. He took a dead USU program and turned it into a tough winner. – Chris Turner

Yes, I think Andersen is a good hire, too. He?s a defensive-minded coach, just like Barry Alvarez was and Bret Bielema was prior to them taking over the Badgers. The Aggies are ranked No. 8 nationally in scoring defense (15.4 points per game) and No. 15 in total defense (322.1 yards per game). Again, credit Andersen. Yes, USU ran a spread attack under Andersen that is in contrast to Wisconsin?s typically physical offense, but it featured run-pass balance. The Aggies are 25th nationally in rushing (204.1) and 39th in passing yards (265.0) this season. They are 33rd nationally in scoring (34.9). But most important, Andersen made Utah State a winner. From 1998-2010, the Aggies had no winning records. But Andersen guided USU to bowls each of the past two seasons. The 11-2 mark in 2012 was the most successful season in school history.

Are there any contract termination issues with Bret Bielema and Wisconsin, or was the contract at an end point this year? – Tom Beyer

The contract wasn?t at its end. Bielema was making $2.6 million at Wisconsin on a deal that ran through 2016. To get out of the deal with the Badgers, Arkansas will pay the $1 million buyout clause.

I saw your list of the top Big Ten basketball arenas. I?m guessing you haven't seen the additions to the Crisler Center at Michigan. – Ryan

I am aware of the renovations to the facility. But my rankings go beyond the physical structure. The rankings were based as much on-if not more so any other quality-atmosphere than bricks, mortar and glitzy scoreboards. And, for the most part over the years, Crisler Arena hasn?t been a very loud or intimidating venue. Now, with the way Michigan is playing-in combination with the sparkling upgrades-Crisler may become a feared and top-notch Big Ten hoop venue on many levels. But, I don?t think it?s there yet.

When it comes to perhaps having divisions for basketball in the Big Ten, how much should records/strength of program be factors in the re-aligned divisions? – Jonathan

Three main factors are at work when it comes to trying to decide where to place schools: 1. Competitive balance; 2. Geography; 3. Rivalries. It is important to try to strike a balance between all three, but one of the criteria must be first. What is it? Well, it depends on who you ask, but rivalries and geography seem to get a lot of mention from the people I talk to.

How about no divisions for football? Rather, let?s have each team play three annual opponents and play the other 10 teams every other year-five one year; five the next. Then, take the top two teams and play them in the championship game. Is there a risk of a rematch? Sure, but that is true now. To have divisions plus one crossover means that, for instance, Nebraska would visit Columbus once every 12 years. Absurd. – Doug Young

Your model has its merits. But let?s not get too worried about trying to figure out divisions and scheduling right now with a 14-team model. Like many people, I think the Big Ten will add two more schools and get to 16 in the near future. Then, let?s start talking about divisions, etc. My scheduling idea for a 16-team league is to have four, four-team divisions with two conferences within the conference. A school would play its three division foes, plus the four schools in the other division in its conference. That?s seven Big Ten games. With a nine-game league schedule, a team could then play two schools from the other conference, rotating foes every two seasons. How about that?

Why do people harshly criticize former Ohio State coach Jim Tressel? He brought us back to the top. He is a fine man with grace and a temperament far preferable to Woody Hayes, whom we all idolized. We played for three national championships under Tressel and would have found a way back to that game. Admire Urban Meyer, but let's wait until he gets us to the Promised Land. – Alan Bowman

Jim Tressel flat out lied to the NCAA and knowingly didn't inform his bosses about NCAA violations that occurred on his watch. In most professions, that is grounds to be fired. (I just wonder what else went on under Tressel?s watch that we never even heard about.) Because of Tressel?s selfish acts to ?keep the machine humming,? Ohio State got hammered with probation that may have cost it a shot at the national title this season. So, Meyer may have taken the Buckeyes to the Promised Land this year-if not for ?Saint? Tressel.

Do you think that The Gophers could make the Final Four this year? – Ben

This probably is Tubby Smith?s best Golden Gopher team yet, as there is lots of depth and experience. There also is a nice blend of size and skill in players like Andre Hollins, Rodney Williams, Austin Hollins, Joe Coleman and Trevor Mbakwe on an 11-1 team (lone loss was to No. 1 Duke) that is ranked No. 13 in the AP poll. No doubt, Minnesota could be a dark-horse Final Four team, as its will and skill will be steeled by playing in the best conference in America this winter. Thrive in the hot cauldron that is Big Ten basketball 2012-13, and Minnesota will be ready for March Madness.