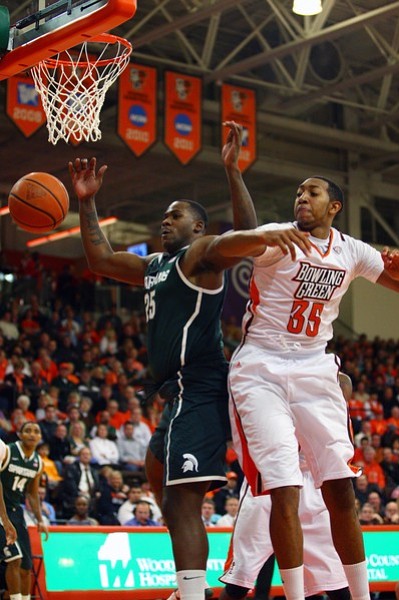 In our preseason Michigan State point/counterpoint, Josh and I debated how the Spartans would replace Draymond Green. Of major concern were not only Green?s offensive contributions but also his excellent defensive acumen. So, after 12 games, how does this Green-less squad compare to last season?s team?

But, dear reader, we always look below the surface. Just as we did for Indiana, let?s look at Michigan State?s average stats through the same number of games last season (as before, I?ve simply averaged the four factors from each game):

We see that the Spartans have played a slightly easier schedule compared to this point last season (note that I assigned a KenPom ranking of 347 to non-D1 Tuskegee, equal to the worst team in D1). This easier slate should be kept in mind as we look at the other raw numbers–if Michigan State were truly as good as last season, we?d expect this season?s raw stats to be a little better thanks to the easier schedule.

Instead, we see that the Spartans have been a little worse at both ends. The overall difference on the defensive end is quite small, but the Michigan State offense has clearly taken a step back. The Spartans are actually shooting a bit better than a season ago, thanks entirely to a higher conversion rate on twos, but everything else about the offense has regressed. The biggest culprit is–stop me if you?ve heard this one before–turnovers.

Tom Izzo?s teams are always sloppy with the ball, but this squad is showing signs of being one of his worst. In the tempo-free era, only one Michigan State squad posted a higher turnover rate than today?s 23 percent. That was the 2006-07 team (Drew Neitzel?s junior year) that earned a 9-seed and was dispatched in the second round by North Carolina.

The good news is that the turnover rate will likely go down from here, just as it did last season. The 2011-12 Spartans ended up with a turnover rate of 19.8 percent–Big Ten defenses simply don?t put a premium on forcing turnovers, so conference play should actually help this number.

The bad news is that this offense still has problems, evidenced by last night?s showing at Bowling Green. The Spartans shot 51 percent on twos but did so little elsewhere that they only scored a point per possession on a permissive defense. With so many possessions ending in a turnover, Izzo?s team will need to attack the offensive glass to get enough shot attempts. To wit, Bowling Green took more field goals AND more free throws than Michigan State–it was the Spartans? superior accuracy that saved them.

The kicker to all of this is that Michigan State?s defense seems to be nearly as good as it was a season ago, with rebounding not posing a problem at all without Green (as we thought it might). This is a team with immense potential, if only it can handle the basketball.

Elsewhere, Northwestern survived an upset bid from Texas State. Drew Crawford's absence was felt at the offensive end, as the Wildcats barely managed a point per trip. That output could have been boosted by better free throw shooting, as Northwestern made just 56 percent of their many trips to the charity stripe. Still, without Crawford, it's hard to see how Northwestern scores enough to make up for its lackluster defense. Stanford comes to town on Friday in a big game for the Wildcats.

Purdue, Ohio State, and Nebraska all sweated out tougher-than-expected challenges from lesser competition. A.J. Hammons continues to show promise for the Boilermakers, as the big freshman scored 15 points on just eight shots.

Tonight, Indiana and Iowa tune up in a doubleheader on BTN. The Hoosiers face a Mount St. Mary's defense that gave up 1.42 points per trip to Pitt, and Iowa gets one of the worst defenses in all of D1, so expect plenty of highlights for the home teams.