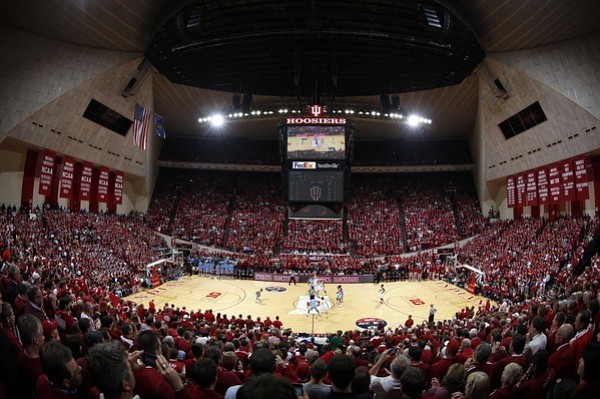 When it comes to the best hoop arenas in the nation, places like Kentucky?s Rupp Arena, Duke?s Cameron Indoor Stadium, UCLA?s Pauley Pavilion and Kansas? Allen Fieldhouse often are mentioned. But the Big Ten has its share of iconic venues, and I rank the conference?s seven best in this week?s Super Seven.

[ RELATED: Where does your team land on our latest Power Rankings? ]

1. Assembly Hall, Indiana. The place has been rocking since it opened in 1971. This iconic edifice has been home to three national titles and countless big wins over the years and was at its best with Bob Knight prowling the sidelines. With its steep side stands and end zone seats, few venues are as intimidating. And players inbounding the ball can literally and figuratively feel the breath of fans behind them.

2. Mackey Arena, Purdue. When the Boilermakers are playing well and this place is packed, there is no louder or hotter arena in the Big Ten on a cold, wind-swept winter night. And kudos to the school for maintaining the integrity and intimacy of Mackey during a recent multi-million renovation that was completed in 2011. There isn?t a bad seat in a place built in 1967 that has kept its age fabulously. 3. Williams Arena, Minnesota. A.k.a. ?The Barn,? walking in Williams Arena is like walking back into a black-and-white era. And, it?s awesome. The venue was opened in 1928 and has undergone renovations in 1950, 1993 and 1997, but it?s starting to show its age. And that has some calling for Williams to be razed. If the place can?t be preserved, here?s hoping a new arena is built in its likeness. We don?t need another generic edifice that mimics an NBA arena.

4. Carver-Hawkeye Arena, Iowa. The place looks funky from the outside. But inside, it?s all business. To walk through the doors and look down into the ?pit? toward the court is a neat experience. Iowa recently renovated the arena, which opened in 1983 and has held its age well. And now that Fran McCaffrey has the hoop team on the rise, Carver-Hawkeye soon figures to explode with excitement as one of the most intimidating atmospheres in the Big Ten-just like in the 1980s.

5. Kohl Center, Wisconsin. I loved the hot-box intimacy of the old Wisconsin Field House. But the Badgers have a sparkling home in the Kohl Center that was opened in 1998. In fact, for a newer venue, few arenas are more intimidating, thanks to a raucous student section. How tough is it to win in Kohl? Bo Ryan is 166-15 in Kohl for a .917 winning percentage since taking over in 2001-02. Bottom line: No Big Ten arena is a better combination of creature comforts and chaos.

7. Assembly Hall, Illinois. Illinois? version of Assembly explodes with energy when the Fighting Illini are playing well, with a rowdy student section dubbed the ?Orange Krush? pumping up the volume. From the outside, it looks like a giant flying saucer, as its profile arches high in contrast to the flat backdrop. Yes, Assembly Hall opened in 1963 and is showing its age, but a renovation is coming that I hope will preserve the intimacy of this classic structure that is standing the test of time.