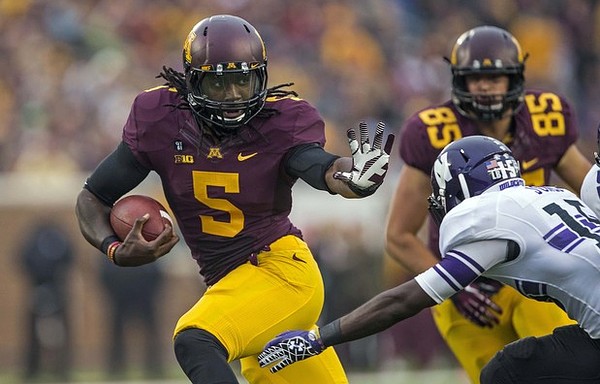 In just his second season in Minneapolis, Jerry Kill delivered the Golden Gophers to a bowl for the first time since 2009. The team jetted to a 4-0 start, but went just 2-6 to finish the season. The offense struggled down the stretch, as the Gophers finished 10th in total offense (317.5 ypg).

Still, there are lots of positives to build on. Minnesota overcame having to use three different quarterbacks, including true freshman Philip Nelson who started the last six games.

High point: A 17-3 win at Illinois on Nov. 10 was Minnesota?s sixth of the season, making the program bowl eligible. It was a workmanlike victory that put the Gophers over the edge, as the defense permitted just 276 yards. The Minnesota offense was at its best in a 44-28 win over Purdue on Oct. 27, racing to a 34-7 halftime lead en route to notching 458 yards. Philip Nelson was on fire, hitting 15-of-22 passes for 246 yards and three scores.

Offensive MVP: RB Donnell Kirkwood. The sophomore paced the team with 849 yards rushing, proving to be the most consistent weapon on a squad that saw quarterback MarQueis Gray deal with injury and a switch back to receiver and top wideout A.J. Barker abruptly leave the team.

Defensive MVP: E D.L. Wilhite. The senior provided a needed rush off the edge, ranking second in the Big Ten in sacks. He also led the Gophers in tackles for loss, emerging as a much-needed playmaker for a defense that made strides by ranking No. 5 in the Big Ten (352.8 ypg) after finishing 10th in 2011 (403.1 ypg).