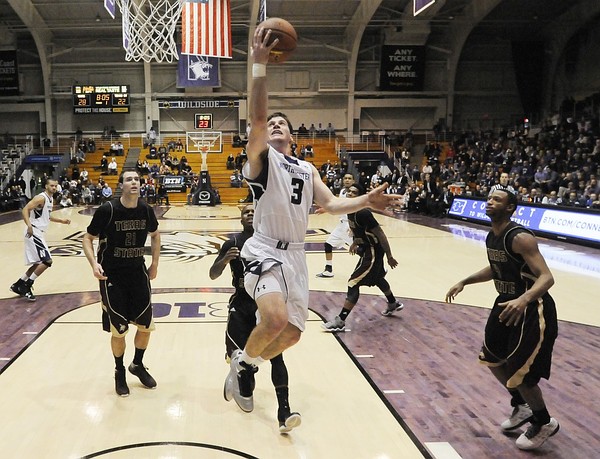 Dave Sobolewski scored 18 points, including a 3-pointer with 1:45 left to give Northwestern a lead, and the Wildcats closed the game on a 12-0 run to defeat Texas State 74-68 on Monday night.

The Bobcats led 68-62 with less than 4 minutes left, but five straight free throws, two each by Sobolewski and Reggie Hearn and one by Jared Swopshire, cut it to 68-67. After Sobolewski connected on his jump shot to put Northwestern (8-3) ahead 70-68, free throws by Alex Marcotullio, Sobolewski and Swopshire completed the scoring.

FINAL: Northwestern trailed in the crunch time on Monday, but took the lead for good on a field goal with 1:46 remaining by Dave Sobolewski and hung on for a 74-68 win over Texas State at Welsh-Ryan Arena. Down 68-62 with 3:31 to go, Northwestern (8-3) broke out for a 12-0 run to take a six-point lead with one second to go. Sobolewski sparked Northwestern, as he scored 18 points in the comeback victory.

HALFTIME: Joel Wright scored 15 points and Wesley Davis added 12 for Texas State in the first half to carry the Bobcats to a 39-37 lead over Northwestern. The Wildcats were leading 33-27 before they allowed the Bobcats to make a late 12-4 run and take a lead into the half. Tre Demps leads the Wildcats with nine points, on a trio of 3-pointers.