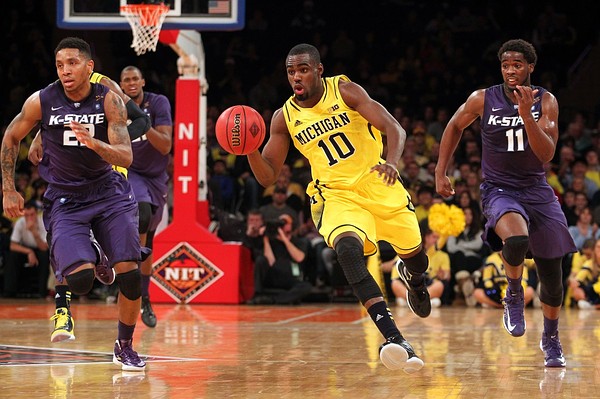 With Indiana?s loss to Butler, it looks like there is a new "best" team in the Big Ten–at least for a week. Meet Michigan, which is a great starting point to begin my daily links.

This Michigan hoop team is good-really good. And a major reason for that is the backcourt, which could be the best in the nation. With Trey Burke dominating, Tim Hardaway, Jr., holds the key to how high the Wolverines can soar, says Nick Baumgardner of MLive.com.

No doubt, if Hardaway avoids any ugly shooting slumps, this will be a very difficult backcourt to defend-especially when you factor in sweet-shooting Nik Stauskas.

Still can?t get No. 1 Indiana?s stunning overtime loss to unranked-but-always-pesky Butler out of your head? Here?s more boffo analysis.

Indiana?s 88-86 overtime Crossroads Classic defeat in Indianapolis on Saturday exposed unexpected vulnerability, says Pete DiPrimio of the Fort Wayne News-Sentinel. The unranked Bulldogs staggered the Hoosiers (9-1) with 19 offensive boards and 27 second-chance points, punished them with physical play and, at the end, stunned them with crunch-time execution.

Yes, the loss is painful for Indiana, but now is the time to solve problems. March is still over two months away. One game in December, actually, means little.

While on the subject of hoops: The time is now for Purdue if it hopes to post a winning record in non-conference play-and perhaps salvage a season that already is careening out of control.

The Boilermakers can?t shoot-and are sloppy with the ball. Before time runs out on the season, Matt Painter may turn to a core of freshmen-Rapheal Davis, A.J. Hammons, Ronnie Johnson–for a spark, says Jeff Washburn of the Lafayette Journal-Courier. Why not? This Purdue team has nothing to lose and is headed nowhere fast with a 4-6 mark.

After getting jilted by Jake Waters, Penn State found the quarterback it needed to provide depth this spring: JC Tyler Ferguson.

According to reports, Ferguson is expected to enroll in January and battle Steve Bench. Touted freshman Christian Hackenberg is expected to sign in February and begin practice in August. But filling the void left by Matt McGloin?s departure will be difficult.

If you are scoring at home, that?s two four-star recruits that have ditched Iowa. Delano Hill is the latest, opting for a Michigan offer. In October, David Kenney de-committed and chose Indiana.

Marc Morehouse of the Cedar Rapids Gazette says this leaves Iowa and Minnesota as the only two programs in the Big Ten without at least one four-star recruit, according to Rivals.com. But, honestly, since when did Kirk Ferentz make a living signing ballyhooed recruits? Never. I have a feeling the Hawkeyes will be just fine.

Remember the flap involving the departure of Minnesota receiver A.J. Barker? Sure you do. Well, the New York Times sunk its teeth into the acrimonious divorce that ended with Barker ripping off a 4,000-word diatribe about his experience and alleged treatment by Gophers coach Jerry Kill.

The basic gist of the piece: The authority of coaches is absolute no longer. And the line between tough discipline and abusive behavior is, well, apparently thin. Kill disagrees with how he is depicted in the story.

By the way: Barker has landed at the University of Houston. Let?s all just move on, OK?

For a team that won 10 games and a division title, there seems to be a bit of a negative vibe around Nebraska. Blame it on that ugly 70-31 loss to Wisconsin in the Big Ten title game. But Bo Pelini is telling his players to not apologize for the standout campaign.

Steve Sipple of the Lincoln Journal Star points out Pelini the psychologist will earn his salary this month. It is human nature to slide toward the negative. Bo's job is to push his team past the 70-31 discussion and somehow build back players' confidence. Focus on the 10 wins, not the losses. Let the rest of the world mull how it wants to regard Nebraska's season; the 23rd-ranked Huskers must figure out how to beat No. 6 Georgia in the Jan. 1 Capital One Bowl.?

Beat South Carolina, and all will be well. Yes, it?s that simple. Funny what a victory can do, isn?t it?

The great Loren Tate of the Champaign News-Gazette is singing the ?Expansion Blues.? Come on! Join in!

Tate?s lament: The inevitable loss of traditional football and basketball games. In football, Illinois should play neighbors Iowa, Wisconsin, Northwestern, Indiana and Purdue every year. These are close, long-term natural rivals. These are the games that the fans want to see. These five should never be off the Illinois football schedule.

But that could be largely washed away with expansion and subsequently division realignment. Tate, of course, is correct. But nothing stands in the way of change. In fact, this expansion explosion of recent years hearkens to the old phrase: ?Change, or perish.?

My take: This, ladies and gentlemen, is a big reason why Michigan may be the team to beat in the Big Ten.

My take: Two of Michigan State?s most special players in recent years.

My take: This about says it all.