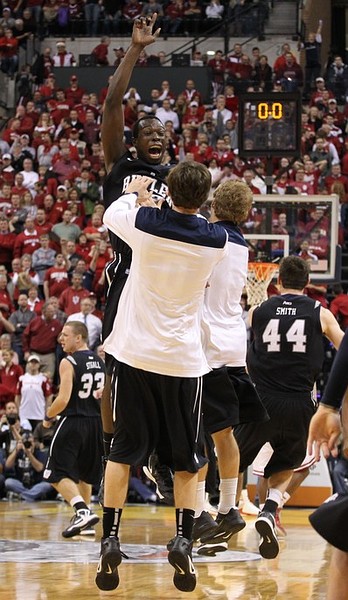 Indiana was upset in overtime by Butler in the Crossroads Classic on Saturday. IU?s undoing was defense, especially in the second half.

Indiana?s defense completely fell apart after halftime, especially on the perimeter. While Butler?s offensive rebounding kept them in the game at first, the teams actually ended up pretty even in that respect. But Butler?s outside shooting was fantastic, as the Bulldogs made 11 of their 24 attempts from beyond the arc.

There?s two ways to look at this. The optimistic way is to point out that nine times out of 10, Indiana wins this game because Butler is not going to normally shoot like that. Coming into this matchup, Butler was shooting under 33 percent from three on the season, and only one Bulldog was shooting over 30 percent (Rotnei Clarke). And Clarke wasn?t the guy that beat the Hoosiers (although he scored 19 points, it took 19 shots to get there). Indiana dominated this game in every other respect (especially in getting to the free-throw line), so there?s no reason to panic over this loss. It?s just one of those fluke upsets where the underdog gets hot from long range.

There?s also a more pessimistic way to look at this as well. My counterpart Mike pointed to Indiana?s improved three-point defense as a reason to believe in the Hoosiers? defensive efficiency this season. But I?m not so sure. Yes, opponents came into this game shooting 26 percent from three against Indiana, but they were attempting a lot of three-pointers. Now, maybe this would be in response to an imposing front line that makes things difficult in the paint. Sure, that?s possible-making twos against the Hoosiers has been tough sledding as well. But it could also just mean that Indiana gives up a lot of open three-point looks, and the other teams just haven?t been making them.

Going forward, I expect opponents to try and burn the Hoosiers from the perimeter. We?ll find out soon enough whether IU?s early perimeter defense has been a mirage after all.

Iowa finished its tour of the state by taking care of Northern Iowa in the Big Four Classic. Roy Devyn Marble and Mike Gesell combined for 53 points on just 23 shots in a brisk 72 possession game. The pace was remarkable considering the UNI is one of the slowest teams in Division I, though it didn?t seem to bother them in terms of turnovers. But Iowa just lived at the free-throw line, attempting three free throws for every four field goal attempts. This is especially notable because over half of Iowa?s field goal attempts were three-pointers, which isn?t a shot that generally draws a lot of fouls. It didn?t hurt that Iowa made 48 percent of those bombs as well. In all, Fran McCaffrey?s team posted an efficiency of 1.11 despite shooting under 40 percent from two-point range.

With their non-conference schedule basically finished, save for a couple of cupcakes at home, the Hawkeyes are still on track to be in the bubble conversation on Selection Sunday. Both of their losses were away from Carver-Hawkeye, and both came against quality opponents. The wins over UNI and Iowa State could also prove valuable in March. I think there?s a good chance this team sneaks into the Tournament even with an 8-10 record in conference play. Anything better than that, it should be a lock.

One team that you won?t find anywhere near the bubble is Nebraska, which was pummeled in Eugene by the Ducks. Nebraska?s offense was absolutely atrocious, as the Huskers scored just 38 points in 64 possessions (0.59 efficiency). When you see that kind of output, it?s never just one thing, the truth is that Nebraska didn?t do anything well. The team turned the ball over, it couldn?t make a shot from inside or outside the arc, it didn?t get to the line, and-most amazingly, considering all the errant shots-the Huskers secured only five of their misses. This was a ?burn the tape? game (at least on offense, Nebraska actually defended reasonably well), but Tim Miles? team is going to have a lot of issues on offense this season. Not that this is news to him.

Purdue also struggled on offense against Notre Dame, scoring just 0.93 points per possession. There were a couple of bright spots for the Boilermakers, however. First, D.J. Byrd finally found his shot, making 3 of his 7 three-point attempts. And freshman Raphael Davis had a breakout game, scoring 21 points on 8 of 9 shooting. Coming into the game, Davis had made just 11 shots all season, so this performance was unexpected to say the least.

The good news is that Purdue certainly could use another scoring option. The bad news is that Davis? game is all-too emblematic of this team, mostly consisting of mid-range jumpshots. Sure, sometimes you make 8 of 9 of those, and you have a big game. But most of the time, it?s just inefficient offense. The hope is that Davis builds on this and begins to either draw fouls (a good start on Saturday, as he netted five free-throw attempts on 9 shots) with shots in the paint, or he develops a three-point shot. And I think he has the potential to do both. He?s now 11 of 13 on free throws, which suggests that he has a good stroke, and he?s getting to the line with some regularity so far. A good comparison might be someone like Joe Bertrand at Illinois. Bertrand lived in the mid-range last season, but this season he?s really added a three-pointer to his arsenal, and has been a much more effective player as a result. If Davis follows a similar path, he could be a big contributor in the near future. Of course, he could also just be the next John Hart, who has a big game only to fade into obscurity.

Michigan kept on rolling, comfortably beating West Virginia in a game the Wolverines controlled throughout. The Beilein offense was firing on all cylinders, as the team shot 72 percent on their two-pointers. Tim Hardaway, Jr. and Trey Burke combined for 52 points on 28 shots. The one sour note for Michigan is Jon Horford?s injury. The redshirt sophomore dislocated his kneecap, and it sounds like he?s going to be out for at least a couple of weeks. This might be the time to point out that Beilein appears to have settled into a six-man rotation. While guys like Spike Albrecht, Matt Vogrich, Caris LeVert, and Horford have all played, for the most part they?ve only entered the games once Michigan took a healthy lead. From the look of it, Beilein looks ready to roll with his five starters, plus Mitch McGary, when the Wolverines hit conference play. I don?t think this indicates any reluctance by Beilein to play a deep bench, but it?s clear that those six are just that good.

It?s relatively quiet this week as the students finish off finals, but there is at least one interesting matchup before the weekend. On Friday, Stanford visits Northwestern to test the Wildcats without Drew Crawford. The Cardinal are a legitimate team again this season, so a win would be a signal that you shouldn?t count out Carmody?s crew just yet.

Saturday is a huge day for Big Ten hoops, headlined by Kansas? visit to Value City Arena to take on the Ohio State Buckeyes. Michigan State also hosts a Texas team that has been struggling in the early going, and Illinois squares off against Missouri in the annual Braggin? Rights game. The Illini have dropped the lost three of these matchups, and you can bet that the seniors don?t want to finish their careers winless over the Tigers.